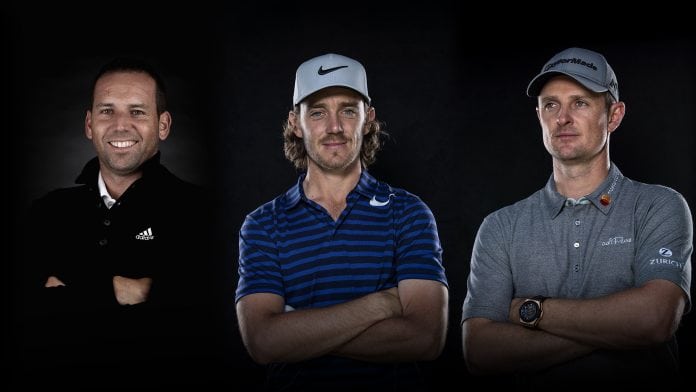 The European Tour’s Race to Dubai is set for a thrilling conclusion when the season-ending DP World Tour Championship gets underway at Jumeirah Golf Estates today.

Englishman Tommy Fleetwood remains in pole position heading into the prestigious US$8 million Rolex Series event after a glorious season that has seen him pick up titles at the Abu Dhabi HSBC Championship and the HNA Open de France along with a further eight top ten finishes including runner-up at the WGC-Mexico Championship and fourth place at the US Open.

“It’s been the biggest year of my career by a long way,” said Fleetwood whose only European Tour victory previous to this season came at the 2013 Johnnie Walker Championship at Gleneagles. “The goal at the start of the year was to win again as I hadn’t won in over three years. I did that very early on and I was constantly reassessing (my goals) for the first six months because I was on a roll and I just kept having brilliant results.”

While every player dreams of winning Major Championships, Fleetwood believes that the consistency required to come out on top of the season-long Race to Dubai rankings is up there with the loftiest of goals a player sets out to achieve in their career.

“There’s a list of very, very great players that have won the Race to Dubai. If it’s my turn, then that’s amazing. That’s brilliant.

“You do look at individual events like the Majors. They are the ones that everybody wants to win.

“(But) I think it is a bit harsh that a lot of people’s careers are defined by four events, and the end of the day, anybody can have a hot week with the putter and win.

“Over the course of a year, it’s a lot more difficult and I think it does hold a lot of respect with your peers, having that consistency throughout a year.”

Fleetwood is the leader of the pack with 4,235,987 points heading into this week’s tournament but his good friend, and playing partner for tomorrow’s opening round Justin Rose, is breathing down his neck, just 256,737 points behind after a timely burst of late-season form that saw him claim back to back victories at the WGC-HSBC Champions and the Turkish Airlines Open. Victory here this week would seal a second Race to Dubai title for the Englishman exactly ten years after wrapping up his first by winning the season-ending Volvo Masters at Valderrama.

“It’s actually a very similar situation,” said Rose who has a season total of 3,979, 250 points. “I think mathematically, Valderrama in 2007, I could have maybe finished second or third, but went ahead and won the tournament. It’s probably something fairly similar this week. But at the end of the day, to win the Race to Dubai, I have to contend in this tournament one way or another. I need to finish towards the top end of the leaderboard, and if you’re going to finish at the top end of the leaderboard, you may as well focus on trying to win the tournament.”

With Masters Tournament and Dubai Desert Classic winner Sergio Garcia slightly further back at 3,184,582 points but also in with a mathematical chance of securing Race to Dubai glory, the ninth edition of the DP World Tour Championship is poised for captivating drama at Jumeirah Golf Estates.

Tommy Fleetwood and Justin Rose tee off at 12.40am on Thursday November 16th at Jumeirah Golf Estates.