What does it take to be voted the best employer in the world? Maybe it is allowing staff to take a nap during the working day, as Google does at its London office.

Google’s parent company Alphabet is the best employer in the world, according to data compiled by Statista and Forbes on the best publically listed companies to work for.

Perks of the job at Google include offices with slides and as much gourmet food, smoothies and coffee as you want to eat and drink.

However, while these fringe benefits grab the headlines, studies show that what employees really value most is pay, prospects, feeling respected, trust and having strong relationships with colleagues.

Statista analysed more than 360,000 recommendations for a listed company as an employer. In order to evaluate companies as a top employer, employees were asked to rate their own employer internally as well as to say how likely they would be to recommend other employers in industries they are familiar with. 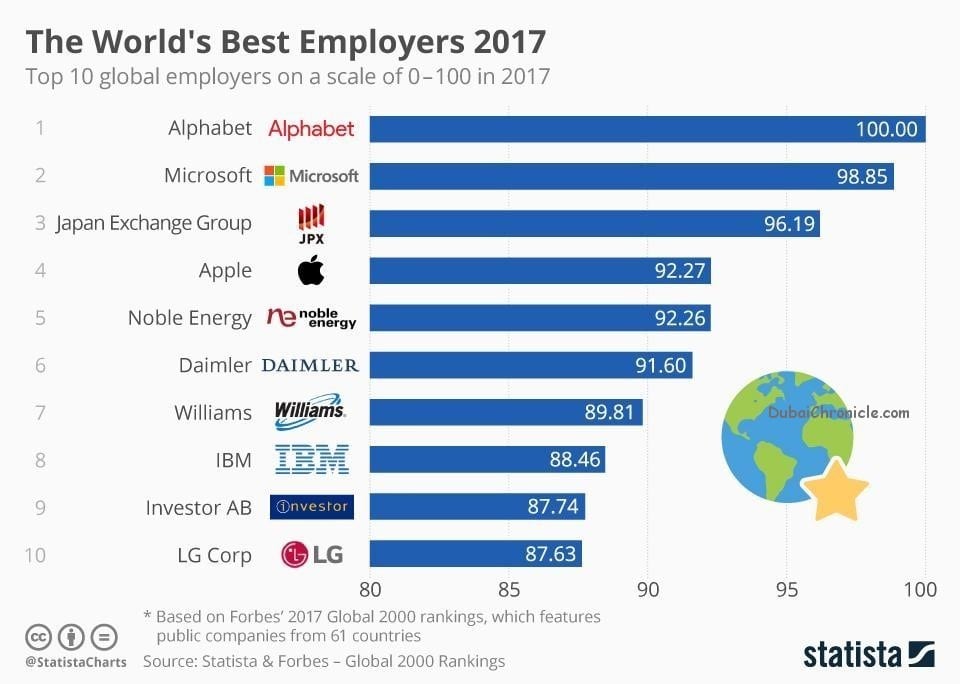 Alphabet came top with a perfect score of 100, with employees citing the company’s image, working conditions and diversity as the reasons for its top rating.

It is closely followed by Silicon Valley rival Microsoft with a score of 98.85, and in total four of the top 10 employers were US tech firms: Apple was in fourth place, and IBM eighth.

Six of the top 10 employers are from the US, two from Asia and two from Europe.

Third-placed Japan Exchange Group is rated highly by its employees thanks to its strong commitment to training and flexible working: in addition to internal training it pays annual tuition fees of up to $2,700 for each employee to study for a qualification; and 100% of its female employees return to work after maternity leave thanks to Japan Exchange Group paying for childcare and offering staggered working hours.

Japan Exchange Group is one of 22 financial services companies to feature in Statista and Forbes’ top 500 employers, and just one of two in the top 10: the other is Sweden’s Investor AB, which came ninth with a score of 87.74.

As well as surveying the opinions of employees, Forbes and Statista also looked at how companies were perceived by people outside of the organization.

Their Top Regarded Companies rankings threw up surprisingly different results to the survey of employees, with just two of the top 10 employers list – Alphabet and Apple – making the grade.

The research asked 15,000 respondents from 60 countries to give their opinions on the businesses featured in Forbes’ Global 2000 ranking of the world’s biggest publicly listed companies.

The companies were evaluated based on trustworthiness and honesty, social conduct, the company as an employer and the performance of the company’s product or service. 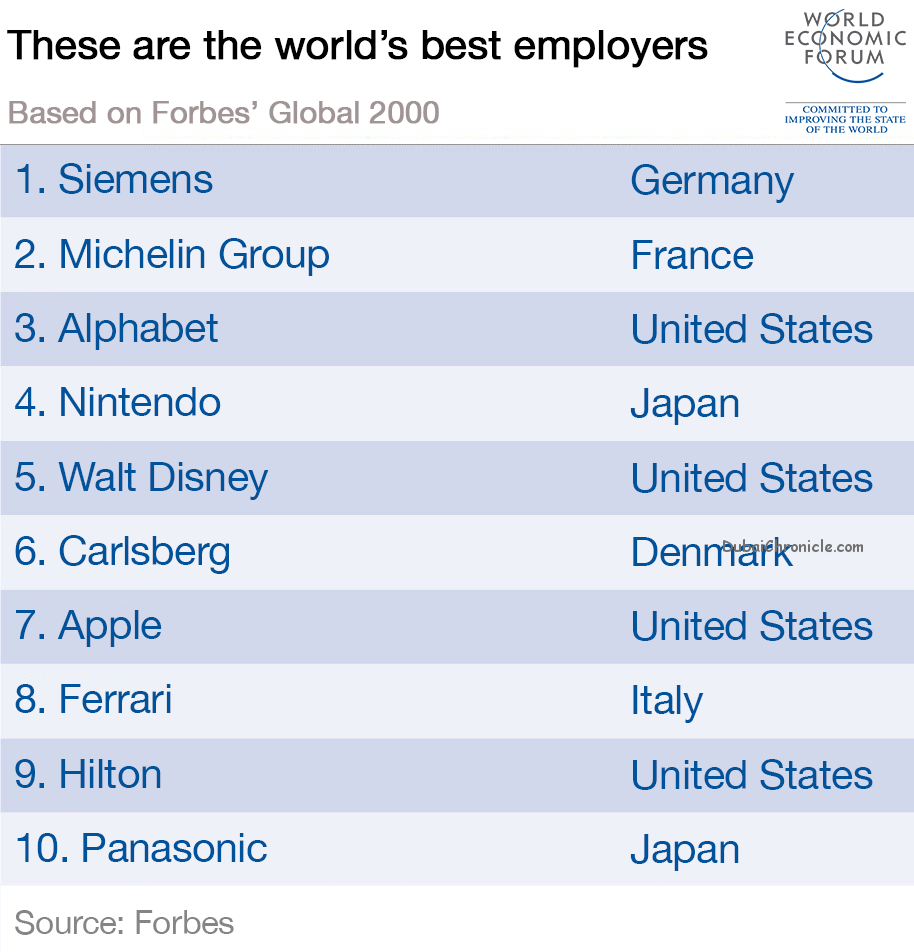 German engineering giant Siemens comes out on top, thanks to being regarded as highly trustworthy by people outside of the business.

The power of the brand to create a favourable view of a company becomes clear as you look further down the full list of the 250 Top Regarded Companies.

It is dominated by strong brands, and it isn’t until German software company SAP in 17th place and Swiss toilet manufacturer Geberit in 18th place that you arguably reach companies that aren’t instantly recognizable household names.

By coming third in the highly regarded rankings, Alphabet is one of the few companies being viewed positively by both employees and outsiders.

In Google it has created a brand so powerful that, like Hoover before it, it has entered the Oxford English Dictionary as a verb for the function that it carries out.

Having an office where you can nap is an attractive perk, but it probably isn’t the reason that more than 2 million people every year apply to work at Google.