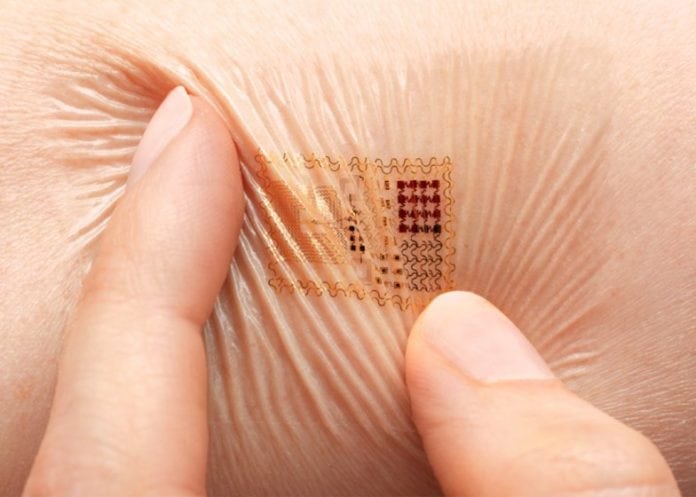 A new, electronic skin microsystem tracks heart rate, respiration, muscle movement and other health data, and wirelessly transmits it to a smartphone. The electronic skin offers several improvements over existing trackers, including greater flexibility, smaller size, and the ability to stick the self-adhesive patch just about anywhere on the body.  This is a very soft silicone about four centimeters (1.5 inches) in diameter.

The electronic skin contains about 50 components connected by a network of 250 tiny wire coils embedded in protective silicone. The soft material enables it to conform to body, unlike other hard monitors. It wirelessly transmits data on movement and respiration, as well as electrical activity in the heart, muscles, eyes and brain to a smartphone application.

Unlike flat sensors, the tiny wires coils in this device are three-dimensional, which maximizes flexibility. The coils can stretch and contract like a spring without breaking. The coils and sensor components are also configured in an unusual spider web pattern that ensures “uniform and extreme levels of stretchability and bendability in any direction.” It also enables tighter packing of components, minimizing size.

The microsystem was developed by an international team led by Kyung-In Jang, a professor of robotics engineering at South Korea’s Daegu Gyeongbuk Institute of Science and Technology, and John A. Rogers, the director of Northwestern University’s Center for Bio-Integrated Electronics. The team described the new device in the journal Nature Communications.

The researchers liken the design to a winding, curling vine, connecting sensors, circuits and radios like individual leaves on the vine.

The key to creating this novel microsystem is stretching the elastic silicone base while the tiny wire arcs, made of gold, chromium and phosphate, are laid flat onto it. The arcs are firmly connected to the base only at one end of each arc. When the base is allowed to contract, the arcs pop up, forming three-dimensional coils.

The entire system is powered wirelessly rather than being charged by a battery. The researchers also considered key electrical and mechanical issues to optimize the system’s physical layout, such as sensor placement or wire length, to minimize signal interference and noise.

The electronic skin could be used in a variety of applications, including continuous health monitoring and disease treatment. Combining big data and artificial intelligence technologies, the wireless biosensors can be developed into an entire medical system which allows portable access to collection, storage, and analysis of health signals and information. Further studies will be conducted in order to develop electronic skins which can support interactive telemedicine and treatment systems for patients in blind areas for medical services such as rural houses in mountain village. The microsystem could also be used in other areas of emerging interest, such as soft robotics or autonomous navigation, which the team is now investigating.