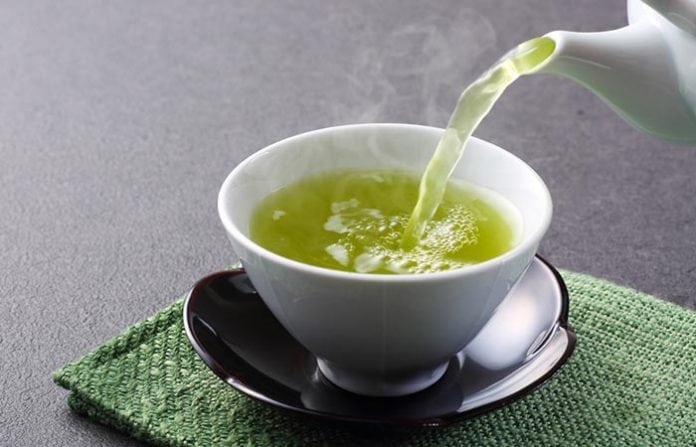 Green tea for weight loss has gained tremendous popularity, but that is not all. Green tea emerged as an all-around health elixir, touted to burn fat and prevent an array of illnesses, including cancer and heart disease.

With enticing names such as â€œGreen Tea Triple Fat Burnerâ€ and â€œGreen Tea Slim,â€ many people are drawn to supplements of green tea for weight loss.  Meanwhile, tea, including green teaâ€”made by steeping tea leaves or blending green tea powder in hot waterâ€”is the second most popular beverage worldwide, surpassed only by water.

But is there scientific substance behind the claims that green tea is good for your waistline or your overall health?

We reviewed multiple researchers and articles examining the properties of green tea for weight loss and here is the conclusion.

Itâ€™s true that green tea can raise your metabolic rate, so you burn more calories. This effect is probably due to a combination of its caffeine and catechins. These are antioxidants that are plentiful in green tea and present in smaller amounts in some fruits, dark chocolate, and red wine.

But the effect is likely to lead to little, if any, change on the scale. People think if you drink a few cups of green tea, youâ€™ll see the fat melt away. Thatâ€™s just not going to happen.

Even at large doses green tea’s weight loss effect is minimal. For example, in a study published in the journal Clinical Nutrition in 2016, overweight women took either a daily dose of about 1,350 mg of green tea extract in supplement form (the equivalent of roughly 15 cups of green tea) or a placebo for 12 weeks. While the green tea group dropped an average of 2.4 pounds, the women taking the placebo lost 4.4 pounds.

Whatâ€™s more, experts warn against taking the large amounts used in studies like this oneâ€”and recommended on many supplement labels. There have been reports of serious liver damage in people who used green tea supplements. This level of intake may well border on the toxic range. The potential risk of liver damage is one reason green tea extract is included on some lists of supplements you should never take.

Still, when it comes to losing weight, working a few cups of brewed green tea into your diet isnâ€™t necessarily a bad idea. Like coffee, green tea may give you a mild boost, and if you don’t add sugar, it has no calories. So drinking it in place of sugary drinks like soda can help you cut calories.

But donâ€™t guzzle gallons of it. Studies show that drinking three to five cups per day (up to about 40 ounces) is generally considered safe.

Catechins are also credited for green teaâ€™s cancer-fighting potential. These antioxidants have the ability to block the action of unstable molecules called free radicals, which can cause changes in healthy cells that sometimes lead to cancer. But thereâ€™s no solid proof yet that the catechins in green tea help to prevent cancer in humans, despite some promising studies in test tubes and animals.

In 2009 the Cochrane Library published a review of 51 studies that included a total of more than 1.6 million participants. Each study investigated whether consuming green tea reduced the risk of developing specific types of cancer, including those of the breast, colon, oral cavity, liver, pancreas, and prostate.

The results were conflicting. After scrutinizing the data, the evidence of a benefit wasnâ€™t strong enough to recommend using green tea to prevent cancer.

Thereâ€™s some data to suggest that green tea can reduce the risk of cardiovascular diseaseâ€”a narrowing of the arteries that can lead to heart attack, chest pains, or stroke. Best of all, you donâ€™t need to drink vast quantities to achieve significant benefits.

For example, in a study of more than 40,500 adults, researchers in Japan found that those who had five or more cups of green tea per day were 26 percent less likely to die of cardiovascular disease over an 11-year period than those who drank just one cup per day.

Similarly, a study of 76,979 people published in the Journal of Epidemiology and Community Health in 2011 found that women who drank one to six cups of green tea per day had a reduced risk of dying of cardiovascular disease (over an average of 13 years) compared with those didnâ€™t drink any.

How might green tea protect the heart? Experts say it may reduce high cholesterol levels and high blood pressure, both of which are important factors in causing cardiovascular disease.

Thereâ€™s no harm in drinking reasonable amounts of green tea, but itâ€™s no miracle cure. To reduce your risk of diseases such as cancer and heart disease (as well as keep your weight in check), you need to eat a healthy diet that includes plenty of fruit, vegetables, and whole grains. You should also exercise and avoid smoking.

Green tea alone isnâ€™t going to atone for bad habits and you certainly shouldnâ€™t rely on it as the key to good health.