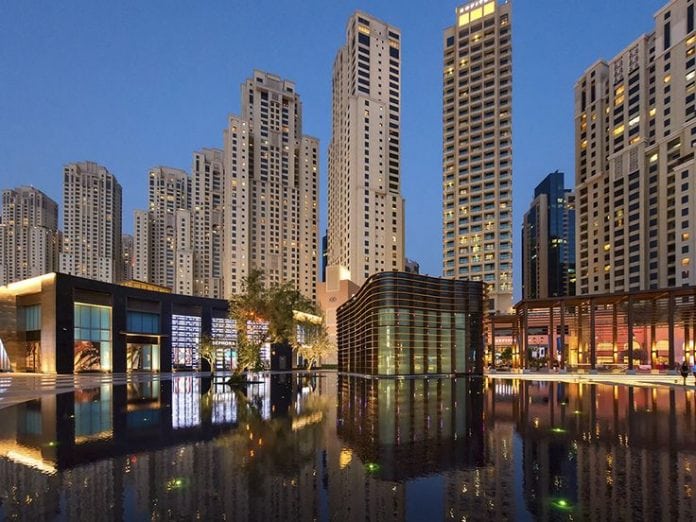 While the first quarter of 2017 has seen a further softening in the hotel and retail sectors of the market, there has been little change in the office and residential sectors, with some encouraging signs that the residential sector is currently close to the bottom of its current cycle.

The latest market summary report discusses the impact of the new Emirates NBD REIT (Real Estate Investment Trust) being listed on the Nasdaq Dubai exchange in Q1. Emirates NBD is Dubai’s largest lender, and the launch of its REIT will aim to improve liquidity and enhance flexibility in the market. The report states other REIT’s are expected to follow this trend over time and with such positive ventures, investors will continue to show interest in a broader portfolio of properties.

In the office sector, vacancy rates currently stand at 14%, highlighting the continued strength of demand for high quality and ‘smart’ buildings. Technological and organizational change are on the rise and are altering workplaces as offices are measured and analyzed in more detail. In the last global report ‘workspace reworked’, JLL identified how these changes are giving occupiers, developers and investors strong insight into reevaluating their approach in investing in the office sector in the future.

“While we recognize that the MENA region is perhaps not directly at the forefront of revolutionizing the workplace, the young, dynamic, innovative nature of the region, especially Dubai, means its real estate markets are likely to implement and adjust to these changes rapidly over the next 20 years,” says Craig Plumb, head of MENA, JLL.

“With Dubai’s real estate market showing signs of maturity and the subsequent REIT’s entering the market, changes are already taking place in other sectors of real estate. The residential market remains a favorite destination of investment among Indian investors and according to recent data released by Dubai Land Department (DLD), there has been AED 12 billion (USD 3.3 billion) worth of property transactions that have incurred among investors from India. Although the residential market continues to slow down, this figure highlights the potential the sector has in terms of growth in the future,” he added.

F&B is an important sector of the Dubai market Q1 saw the opening of the second ‘Last Exit’ at Al Qudra lakes, a popular weekend hub for residents. This venture is testament to the fact that the retail sector is gearing towards the F&B market and with such initiatives, these food hubs have increased diversity to residents and tourists visiting the city.

The government in Dubai has eased visa requirements, to help achieve its 20 million target by 2020. With visas now being granted upon arrival for Chinese visitors, a surge in visitors from China is expected to be experienced during 2017.

The Greens area dominated new supply, with the two Onyx towers adding 66,000 square meter of Gross Leasable Area (GLA) to the market during the first quarter of 2017. These strata titled buildings are the first completions of new office space in this location since 2006. The pipeline for the remainder of the year remains relatively active, with approximately 235,000 square meter of GLA expected to enter the market. JLT contributes the largest share of this total, adding 60,000 square meter of GLA during the second quarter of the year, with only 15% of completions in the CBD (where the major addition in 2017 will be further space in the One Central project).

With more tenants looking to consolidate to cheaper locations, the outlook for the office sector in Dubai remains muted. Despite the limited new demand, vacancy rates in the CBD started to decline in Q4 2014, and have continuously marked downfalls since then (currently standing at 14%). This highlights the strength of demand for high quality buildings, in line with the global demand for ‘smart’ buildings identified in JLL’s recently released report ‘Workspace Reworked’. Dubai has long been characterized as a city, which follows trends of innovation, with the office sector being no exception. As the demand for ‘smart’ offices increases, tenants will increasingly seek space in these buildings (ICD Brookfield being an example, which will enter the market in 2019) and thus, we believe it’s the quality buildings which will continue to do well.

The completion of around 1,500 units (apartments and townhouses) in Akoya during Q1, comprised the majority of the 2,600 units that were completed during the quarter. Apartments comprised more than 60% of completions, followed by villas at 24% and town houses (15%). A further 28K units are currently under construction and scheduled for delivery by the end of 2017. Actual completions are likely to be far less (assuming a materialization rate of 50% around 14K could be delivered, which is broadly in line with absorption levels over recent years). Key projects in the pipeline include two master planned communities by Emaar (Dubai Hills Estate and Arabian Ranches 2) and two apartment buildings (Burj Vista) in Downtown Dubai.

While rentals have recorded a decline over the past year (-7.9% for villas and -2.9% for apartments), there has been barely any change in either rents or prices in the apartment or villa segments of the market during Q1. This suggests that the residential sector is currently poised close to the bottom of its cycle. The key question concerns the timing of any recovery. Given the continued slowdown in the Dubai economy, and its dependence upon the global economy where growth remains uncertain, any recovery in residential prices in Dubai is unlikely before late 2017 at the earliest.

There were no retail completions in Dubai during the first quarter of 2017, with Q2 2015 being the last time the market witnessed additions. The total retail supply currently stands at 3.4 million square meter of GLA. Future supply is expected to grow by more than 20% by 2020, which is slightly ahead of the growth over the past 3 years (17%). There are also a number of ‘Super Regional’ malls such as Deira Mall and Meydan One Mall currently scheduled to complete in 2020. As the retail market slows, some of these major projects may however be scaled back or delayed.

Despite anecdotal evidence, which suggests that the retail market is currently under pressure in Dubai, rents have remained largely unchanged on both a Quarter-on-Quarter and on Year-on-Year basis. From discussions with industry players, we understand that most renewals and new leases did not achieve any increase in retail rents, although developers were asking for these. This suggests that the market is currently in favor of tenants. The number of units able to achieve the same level of rentals has also declined over the past 6 months, further disguising the effective softening in rentals.

The slowdown in the rate of economic growth and the strength of the USD are the major drivers behind weakening retail sentiment. We believe that the long-term picture is more positive. Dubai currently stands at the forefront of entertainment offerings by global comparisons, from shopping malls, to entertainment parks, and cultural as well as theatrical amusements.

The first quarter added 1,100 keys to the market, taking the total to 79,000 keys. Lapita (503 keys) and Rove Healthcare City (286 keys) contributed to the additional supply which entered the market during the quarter. Further expected completions this year include the renovation of The Address Downtown (196 rooms and 625 branded residences units) and the Viceroy on the Palm (477 rooms). The 5-star segment is expected to dominate the completions during this year, contributing more than 50% of total completions, with 3-star hotels still lagging at just 12%. This suggests that although Dubai is diversifying its product mix, it remains largely concentrated towards higher tier market offerings.

Q1 saw a continuation of the same trends seen last year, with strong occupancies but falling ADR’s. The first two months are usually among the strongest of the year (supported by Dubai’s annual shopping festival and the pleasant weather conditions) and Dubai hotels have again benefited from strong occupancies in the Year to Feb (up from 83% in 2016 to 86% this year). Occupancies have however been achieved at the cost of a marginal fall in ADRs (that fell almost 5% from USD233 in 2016 to USD221 for the first 2 months of 2017) increased slightly to USD 221. Increased competition with the opening of several properties in the last few months and pressure on companies’ travel budgets are among the factors driving down ADR levels.