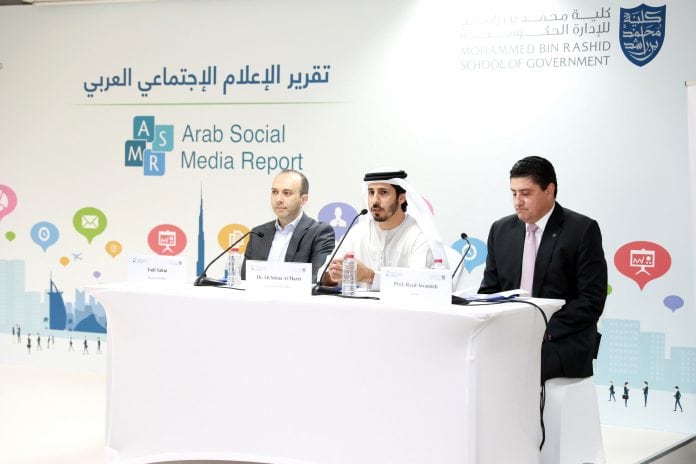 His Excellency Dr Ali bin Sebaa Al Marri, Executive President of MBRSG, Professor Raed Awamleh, Dean of MBRSG, and Fadi Salem, Research Fellow at MBRSG and the author of the report, as well as the School’s faculty and students were present at the launch.

The report highlights the convergence of social media with the Internet of Things (IoT) as potential sources of data for policymaking, given the high penetration of digital devices and social media in the Arab world.

Commenting on the report findings, Fadi Salem said: “Today, around 39% of the Arab World’s population use social media, up from 28% almost two years ago. Youth continue to dominate around two thirds of the users, while Arabic became the most used language in social media activities in the region for the first time ever. However, the gender gap continues to persist on social media in the different Arab regions for the six consecutive year according to our research”.

He added: “This social media growth is today coupled with an expanding foundation of Internet of Things (IoT) in the region and a rapid maturity in big data applications. In the era of the “fourth industrial revolution”, these sources of data are presenting policymakers and businesses with new horizons for development and better policymaking possibilities. However, according to our survey, these promises face numerous limitations and raise wide public concerns ranging from concerns about privacy, loss of control, misrepresentation and misuse of data.”

Analyzing usage trends, patterns and demographics of key social media platforms across the Arab world, the findings show that most social media users in the region (58 percent) already express their views on government policies through these platforms. The report also explored regional public acceptance and readiness on the increased use of their social media and IoT data in policymaking. In the future, if this leads to better policies, a large percentage of respondents said they would support the use of their social media data by governments in policy formulation such as health, education, tourism, transportation and security policies. However, as of today, the majority of respondents expressed various concerns regarding the practices of businesses and governments with regards to social media and IoT data.

At present, the report highlights that social media users in the region are becoming more mature. However, over the past six years, the gender gap increasingly evident on social media in the region – currently one woman for every two men – has remained a chronic issue. The report warns that this lack of adequate female participation on digital platforms may have a negative impact on ensuring inclusive developmental and policy formulation efforts.

The report also registers an increase in the use of the Arabic language on social media over the past two years. On an average, Facebook registers 55 percent Arabic users – up from 43 percent two years ago, while 72 percent of all tweets in the region are now in Arabic. This trend has huge implications on the way governments communicate with their citizens as well as on the way businesses engage with each other and the community.

The report shows continued growth of social media use that reflects a positive social, cultural and economic outlook for the Arab world. In fact, Facebook – the most popular social media platform in the region – has around 156 million users this year, as compared to 115 million in 2016. Qatar and the UAE have by far the highest penetration rates of Facebook accounts with almost 95 percent in each country.

Twitter registers over 11 million active users in the region. Saudi Arabia has the most Twitter users, constituting 29 percent of the total number of users in the Arab world. According to estimates, active Twitter users in the region produced around 849.1 million tweets in March 2016 – an increase of more than 59 percent over two years. More than half of all tweets generated in the Arab world come from two countries – Saudi Arabia and Egypt.

The total number of active Instagram users in the region is 7.1 million, with the most users registered in the UAE.

The full report, produced by the Innovation and Future Government Group within MBRSG, as well as previous editions of the Arab Social Media Report series are available for download at the School’s websites.