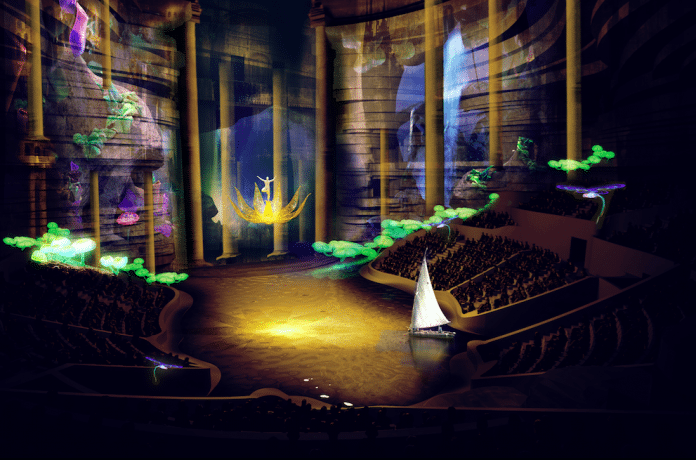 La Perle by Dragone hosted the prestigious association of Les Clefs d’Or yesterday, Sunday 29 January 2017 where a record number of 350 members were given a sneak peek of the state of the art aqua-theatre.

As part of Les Clef d’Or’s educational day programme, La Perle treated the vast group to an exclusive and unique preview to the city’s most anticipated opening. The tour experience began in W Dubai – Al Habtoor City’s Great Room where Craig Hartenstine, La Perle’s executive producer, welcomed the attendees and presented an informative introduction on this spectacular production by the legendary Franco Dragone, which will open this year, 2017.

The esteemed group then moved to the La Perle aqua-theatre to view the architectural marvel, having been under construction over the last three years, the venue will house the most innovative technical resources, essential in creating a show of such magnitude.

Kent Cooper, Head of Sales, said: “We are thrilled to host such a large number of members of Les Clefs d’Or association, not only from Dubai, but from across the region. La Perle will be the region’s first permanent show, an unmissable one-of-a-kind theatre experience, the likes of which have never been seen before and it’s crucial to have the support of hotels’ concierges from across the region. The Concierge teams at every hotel will not only be critical partners, but they will also have direct tickets and real-time availability.”

La Perle will preview this year, with 450 performances a year – two shows, five days a week. In the show, the cast will perform breath-taking aqua and aerial feats in the tailor-made, state of the art, intimate 1,300 seat theatre. The theatre itself will feature an ‘aqua-stage’ filled with 2.7 million litres of water and will have the ability to change from a dry platform to aquatic stage and vice versa. Daredevil performers will dive into the water-filled stage from a height of 25 metres and fly around the auditorium on high-powered winches at a speed 15 km/ph. With this cutting edge stagecraft and state of the art technology fused together La Perle will be a visually stunning spectacle in, on and above water.

La Perle is a new show produced by cultural creative company Dragone, directed by the legendary artistic director Franco Dragone and brought to Dubai by the Al Habtoor Group, the production will be created in Dubai and will embody the spirit of Arabia.

Group and MICE Bookings are being accepted now for mid 2017 onwards with individual tickets going on sale to the travel trade and general public soon.