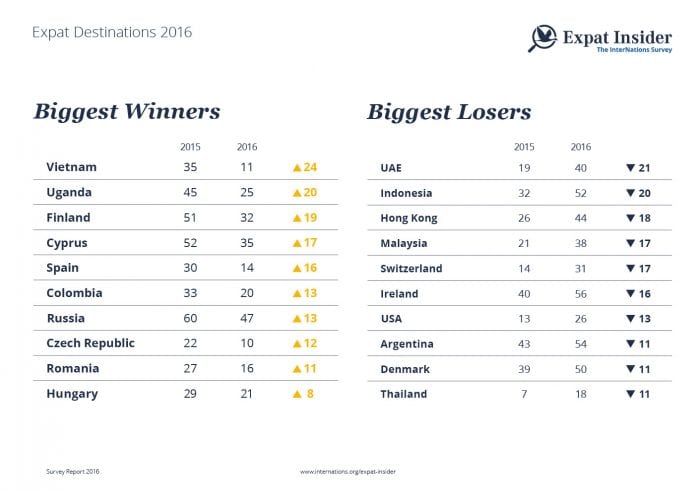 Are you curious about where expats enjoy the best work-life balance? Which countries are great, or less than great, for raising children abroad? Or where expats can make new friends easily?

The newly released country rankings list the best (and worst) among 67 destinations across the globe, focusing on essential topics: quality of life, ease of settling in, working abroad, family life, and personal finance.

For the third year in a row, Expat Insider — one of the largest expat surveys worldwide — offers an in-depth analysis of everyday expat life in more than 60 countries across the globe. More than 14,000 respondents representing 174 nationalities and 191 countries or territories took part and had their say on moving, living, and working abroad. 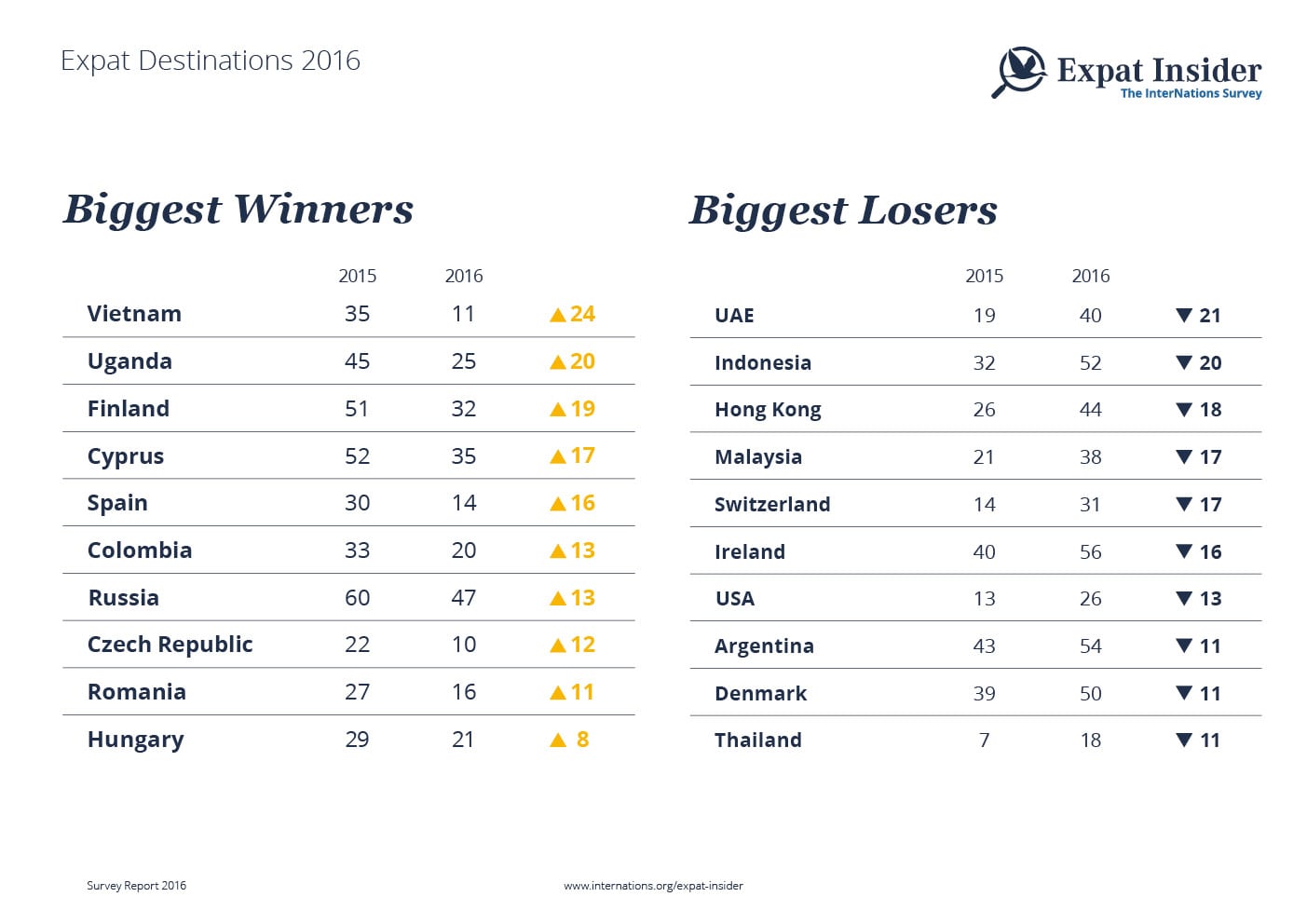 Vietnam, Uganda, and Finland advance the farthest this year, while the UAE, Indonesia, and Hong Kong see the largest losses in the overall ranking.

Vietnam has made the biggest jump in the 2016 survey, rising up an astounding 24 places to come in 11th out of 67 countries. In 2015, on the other hand, this Asian country only came in 35th place out of 64 countries. It made the biggest gains in the Working Abroad Index (from 36th to 12th place) and the Ease of Settling In Index (35th to 29th place).

Expats in Vietnam are very pleased with the friendly nature of the local residents this year. The percentage of respondents that rate the general friendliness of the population positively has risen by ten percentage points (74% to 84%). In addition, over two in five (41%) regard the friendly attitude towards foreign residents as very good (33% in 2015). It also seems to be easier to make new friends among the local residents this year, with 63% generally agreeing that this is easy to do. In 2015, only 48% were of the same opinion.

“The Vietnamese are kind, caring and very considerate, with a good sense of humour. Life is good here, one of the nicest places I have ever lived.”

Uganda: A Spot in the Top Half

“I love the lifestyle and the flexibility in the working hours in Uganda! The culture and people are great as well.”

It is in the Ease of Settling In Index, however, that Uganda has brought in its most spectacular results. The country has come in second in this year’s Friendliness subcategory! In 2015, it was only at 13th place (out of 64 countries) and in 2014 it held 25th (out of 61). A full 94% consider the general friendliness of the population in a positive light, 57% say it is very good, and no one has anything negative to say about it. In 2015, only 88% gave it a positive rating and 8% a negative one.

Finland: A Turn for the Better

Finland has also climbed quite high up the rankings in the 2016 survey, although it still has rather mediocre results overall. It comes in 32nd out of 67 countries this year, up 19 spots from its rather dismal 51st place in 2015. Despite this large jump, the level of improvement in the different indices is not quite as striking. The biggest gains are found in the Quality of Life Index, where Finland went from spot 29th to 19th. And although the country doesn’t do so well in the overall ranking, it comes in a glowing first in the Family Life Index, up one spot from second in 2015.

The impact of splitting the Health, Safety & Well-Being subcategory into two separate subcategories this year as opposed to 2014 and 2015 definitely had a positive effect on Finland’s rankings. This Nordic country comes in third place in the newly created Health & Well-Being subcategory. Three-quarters of expats give positive ratings for the quality of the medical care and 38% even find it to be very good, up from 66% and 20% last year, respectively.

“I’m impressed by the medical care and good education in Finland.”

When it comes to their children’s schooling, a staggering 74% of expat parents in Finland are in complete agreement that the education options are easy to afford. In 2015, this percentage was 38%, about half of what it is this year, but still over three times that year’s global average (12%).

“Extortionately high rents in Abu Dhabi! Rent is paid for the full year or sometimes every six months, which is a massive strain for most people.”

In 2016, the UAE fell from 46th to 54th place in the Work-Life Balance subcategory of the Working Abroad Index. The country took the biggest hit in the Job Security subcategory, however, which includes a question about the state of the economy. Whereas last year a full nine out of ten expats said the state of the economy was good and 52% even rated it as excellent, this year these percentages have dropped considerably to 70% and 26%, respectively. This is most likely due to the low oil prices at the time of the survey and the job and economic insecurity associated with this.

Expats in the UAE are also finding it more difficult to make friends this year, especially local ones. In 2016, 46% generally disagree with the statement that it is easy to make local friends. In 2015, only 38% said the same. A lower percentage of expats think the local language is easy to master, with 23% in general agreement, compared to 28% last year. Given that the language itself obviously has not changed, this could be another indicator of a perceived change in attitude towards foreigners in the UAE. Indeed, the country has lost a few ranks in both the Feeling Welcome and the Friendliness subcategories.

Indonesia is down 20 spots this year, coming in a disappointing 52nd out of 67 countries. In fact, the country has lost ground each year, ranking in the top third at 20th out of 61 countries in 2014 before falling to 32nd place out of 64 countries in the 2015 survey. The country has worsened across the board, with the biggest losses in the Working Abroad Index (37th to 47th place) and the Cost of Living Index (10th to 20th place).

“I have no luck finding a job that’s offering me a decent pay. I will gain nothing in the long run.”

Whereas over three-quarters of survey respondents (77%) were overall satisfied with the cost of living in 2015, only 64% feel the same this year. For the Working Abroad Index, the percentage with a positive opinion about their career prospects, for instance, has dipped below half (49%), compared to 58% last year. This contributed to Indonesia’s fall from 21st to 43rd place in the Job & Career subcategory of this index in 2016.

Indonesia used to rank in the top ten of the Friendliness subcategory of the Ease of Settling In Index (fifth in 2015 and seventh in 2014). This year, however, the country is down to 18th place. In 2015, well over half (55%) said the general friendliness of the local population was very good. This percentage is down at 44% in 2016.

Hong Kong: How the Mighty Have Fallen

The Asian Tiger Hong Kong has fallen quite dramatically since the survey was first conducted in 2014. Back then it even featured in the top ten, coming in 10th out of 61 countries. In 2015, it landed a more mediocre 26th out of 64 countries. Now in 2016, Hong Kong is firmly in the bottom half of the ranking, having fallen an additional 18 spots to land at 44th place out of 67 countries. The Personal Finance Index took a major hit, dropping from 24th to 42nd place. The country also lost eleven spots in both the Ease of Settling In (37th to 48th) and the Working Abroad Indices (22nd to 33rd).

This year’s survey participants in Hong Kong do not consider themselves to be nearly as financially well off as they did last year. A glance at the 2015 results shows 68% generally satisfied with their financial situation; only 57% feel the same this year. Similarly, a higher percentage of expats view the cost of living negatively, up to 72% from 61% last year. As Hong Kong is considered one of the most expensive expat destinations worldwide, this result is hardly surprising.

“The salary is not intended to cover the cost of life in this country.”

In the Ease of Settling In Index, expats in Hong Kong are finding it harder to make new friends in general. In 2015, 70% voiced their overall satisfaction with this factor, while only 61% do so in 2016. In fact, 46% disagree that it is easy to make local friends, while only 32% said the same in 2015.