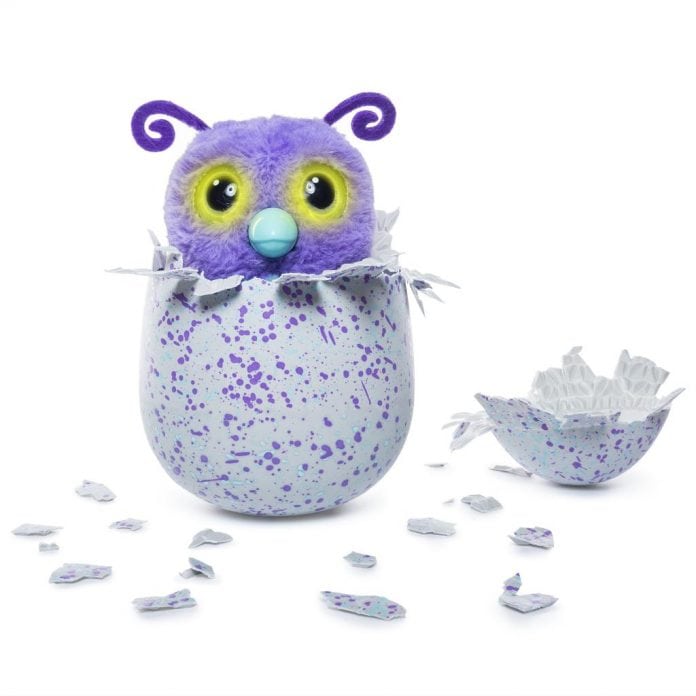 “What is Hatchimals” has now become an important question for parents. If you are one of them, rest assured, one of the most buzzed about new toys of the year has finally… hatched. Already there is a variety to shop here.

Interactive creatures called Hatchimals are predicted to become one of the most wanted toys of the year, according to industry experts.

Until now, parent company Spin Master has guarded the toy inside a large egg made from a hard material similar to plastic. The promise was that when the time was right a little creature inside would break out on its own.

To get these eggs to hatch, kids must interact with its shell, which features touch technology. When you tap on it, the Hatchimal taps back. When you stroke the top or bottom, it lights up and makes sounds.

There are two families of Hatchimals — Pengualas and Draggles — and as the names suggest, their look is inspired by penguins, koalas and dragons. Each costs $59.99.

Hatchimals self-hatch out of a plastic-like egg. When they’re ready to hatch (usually after 30 minutes of continuous play), it’ll do so on its own.

The Hatchimal pecks on the shell — loudly and with force, rotating its head to strike at different spots.

Eventually, the beak breaks through enough to lift the top part of the egg.

A Hatchimal’s behavior matures over a couple of days and weeks. It becomes a toddler and eventually, an adult Hatchimal.

As a baby, you feed it by touching its beak to the floor. It becomes more interactive as a toddler. It’ll dance, repeat your words and move when you clap your hands. The Hatchimal will play games with you in its grown-up stage.

Unlike many other interactive toys in the market, Hatchimals don’t interact with an app, but it is more like a real toy.

Almost 20 years ago, we had the Tamagotchi virtual pet you had to hatch and take care of. Hatchimals is like that but brought to life.

Al Seef to Welcome Dubai Shopping Festival with a 360 Experience