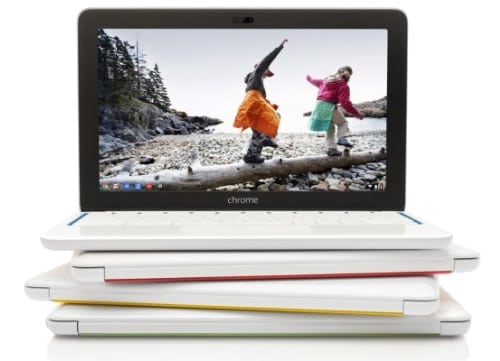 Chromebooks are about to take over the world. Why? Because they are cheap and efficient!

A few days ago, Google announced that Android apps on Chromebooks will soon be available to users from the Google Play app store. So, the Chrombooks (full range here) will become fully capable computers, in a position to put a real dent in Apple and Microsoft’s dominance in PCs.

Chromebooks outsold Macs in the US for the first time last quarter, according to research firm IDC, which tracks PC sales. It’s a sign that a growing number of PC users are realizing they don’t need to spend a thousand dollar or more on a laptop, especially when they’re buying a new smartphone every other year.

Right now, Chromebooks are essentially just the Chrome web browser running on a laptop. While they have some offline capabilities, you’re still mostly limited to what’s possible on the web, which is fine for a lot of tasks, but not ideal when you want to work offline or use certain programs.

Android apps mean a lot for Chromebooks. It’s not just about playing Candy Crush; it opens up a whole new suite of apps to Chromebook users for the first time like Microsoft Office, Photoshop, and better, more capable versions of web apps like Slack or Spotify. Plus, all those apps can run in individual windows like on a traditional PC. Most people probably won’t even realize they’re using an app originally designed for a phone.

When Chromebooks first launched, it was is easy to scoff at them. Who wants a shell of a computer that’s just running a web browser? But that cheap computers are just capable enough to draw in a lot of buyers. The success of Chromebooks, especially in areas like education is measurable.

Now they’re poised to eat into the PC market even more. Soon, there won’t be anything you can’t do on a Chromebook that you can do on a Mac or Windows PC. And, in a lot of cases, you’ll be able to do it for hundreds less. You can get a decent Chromebook for just $178.

That should worry tech giants like Apple and Microsoft. Ever since the modern smartphone era, there’s been fewer reasons to upgrade to a new PC. And when many people are ready, they go as cheap as possible. Access to Android apps will quell any doubts about what a Chromebook can do, and we’re about to go through a fundamental shift in the way a lot of people use PCs because of it.