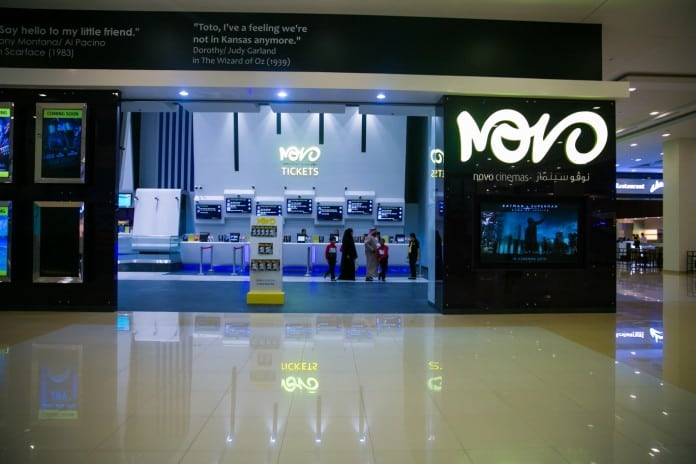 Novo Cinemas, already a dominant player in the film exhibition market in the Middle East, continues to expand its footprint in the region. Following the successful launch of its newest state of the art movie theatre at Dragon Mart 2, Novo Cinemas today announced its plans to continue expansion in the region during the course of 2016.

The first official rollout of 2016 came with the opening of its much anticipated Dragon Mart 2 location. The newest offering at Nakheel’s new Dragon Mart 2 retail complex boasts 1,800 seats across 12 screens, the latest in film exhibition technology, spacious seating and luxury amenities, ensuring “A Great Time Out”.  The theatre delivers an exceptional cinematic experience that is sure to delight.

The Grand Opening of Novo Cinemas Dragon Mart 2 showcased the Movie Premiere   Concussion featuring Hollywood great; Will Smith, along with traditional Chinese entertainment including dragon dances, martial arts, a traditional Chinese tea ceremony and calligraphy art.  Top artists from China delighted the audience with their performances and every guest received a calligraphic memoir of the magnificent launch party.

Speaking at the launch, Novo Cinemas CEO, Debbie Stanford-Kristiansen said, “We are extremely proud to welcome this latest Novo Cinema address at Dragon Mart 2. This new venue is in line with our vision to offer a truly memorable experience from start to finish to the Middle East’s cinema lovers. We selected this strategic location to capture a unique target audience which includes local residents of Warqa’a, International City and surrounding areas, as well as shoppers and visitors from neighbouring GCC states including Oman and KSA who come to Dubai on the weekends.”

As part of its expansion plans for 2016 NOVO Cinemas will increase its contracted screen count from 129 in 2015 to over 200 in 2016 and will launch a number of additional locations during the course of the year including the much anticipated IMG World of Adventures, the World’s largest temperature controlled Indoor Theme Park in Q2 as well as North Gate Mall in Qatar,. Part of this year’s strategy will also see the unveiling of the newly renovated Dubai Festival City multiplex including 7-star and IMAX and a further expansion of 6 additional screens, and the Ibn Battuta Mall Multiplex including two 7-star with a dedicated VIP lounge as well as renovations at both Megamall and Buhaira locations, ensuring all NOVO locations are offering a Premium customer journey and experience.

For those who are ready to be treated to an exceptional movie experience, tickets can be purchased in advance at www.novocinemas.com, via the Novo App or at the express e-kiosks located in the cinema lobby.