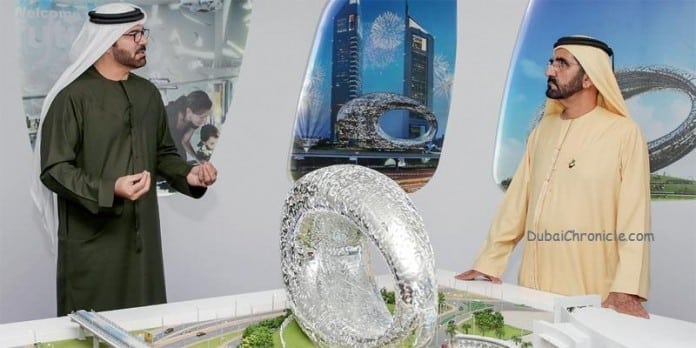 Known for its ultra-modern architecture and luxury, Dubai sets eyes on the future with a brand-new Museum of the Future that will open for the public in just two years. Its oval-like, ring structure will be built partially with 3D-printed materials, while inside, it will be filled with cutting-edge technology, robots, holograms, drones, and many more. Serving as both an attraction and a research facility, the museum promises to be the most innovative project in the Dubai so far.

Last week, authorities in Dubai unveiled plans for the Museum of the Future, with construction work starting this week in the Emirates Towers area near Sheikh Zayed Road. The ambitious project at an estimated cost of $136 million will be ready in 2017, which is an incredible feat in itself. But the secret lies in the way Museum of the Future will be built and in exactly what materials will be used. According to the official statement, the shiny, ovular structure will be comprised of 3D-printed elements, or at least partially. And the futuristic design is completed with large-scale Arabic poetry that will be carved into the metallic facade. It’ll be written by the ruler of Dubai, Sheikh Mohammed bin Rashid Al Maktoum and it will be the only transparent element – there will be no windows, probably in order to keep the building cool in Dubai’s hot, desert climate.

The extremely futuristic museum is designed by Dubai-based architect Shaun Killa, who explained that while the ring-like solid element of the structure represents “what we know today”, the hole stands for the unknown. But the mere shape of the building is just one aspect of its ingenuity – along with being a tourist attraction, the museum is also designed to be a research center, where some of the most brilliant scientists and inventors will experiment and search for solutions to universally challenging problems. Along with the high-tech exhibitions, holograms and simulations, there will be “innovation labs” that will focus on health, education, energy, transportation, and smart cities. A dedicated section will host equipment and the latest technology to allow designers, researchers and inventors to test prototypes and creations in various fields.

The government of Dubai hopes the Museum of the Future will turn into a research and innovation hub, where projects will find financing and businesses and governments will find solutions. The ambitious goal is most likely to be achieved, as with all other undertakings of the emirate. Indeed, if such as museum and research facility can be built at all, Dubai will be the perfect place for it. After all, the city has already shown you can have ski slopes or the largest flower garden in the middle of the desert. The financing, which according to some reports is half a billion dollars, is actually $136 million, which is just a part of Dubai’s current investments on innovation and technology. The emirate has funded competitions for designing robots and drones, while by 2021, the UAE will send a spacecraft to Mars.