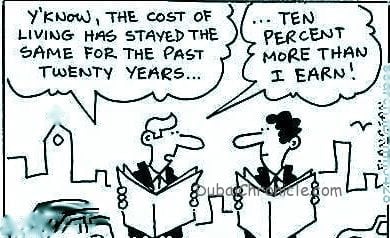 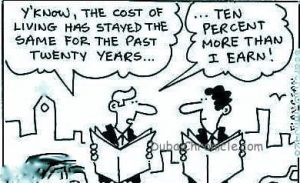 During the past two years, statistics show that Dubai’s economy is on the path to a robust recovery. Some say that a new boom is unfolding, but not everyone agrees as not all economic sectors are witnessing dramatic improvements. In general, UAE is enjoying political stability and a strong revival in the tourism sector. Real estate prices and residential rents are firmly advancing too. However, along that, inflation and cost of living is increasing rather faster than expected.

As Dubai Chronicle has already informed you, in 2013, inflation in the UAE jumped to 1.1%. The last time, when the country saw such a rise was back in 2009. Well, the current inflation levels may not be as high as those registered about 5-6 years ago. As a matter of fact, in the fourth quarter of 2013, officially published statistics revealed sharply rising figures. Luckily, for now Dubai still appear to be far from a double-digit inflation. Nevertheless, the cost of living is already spiking and residents are filling the pinch.

The latest Cost of Living GCC Report clearly showed the effect of inflation on people in Dubai and the country. Even though Qatar lead in many categories, including rents and property prices, the UAE residents pay more for household utilities, British education, as well as for petrol. The cost of simply residing in Dubai is the highest in the Gulf. The above mentioned study has focused on average costs on country level for the entire 2013. Therefore, it does not capture the soaring rents in November and December, right after the emirate won the opportunity to host World Expo 2020.

Usually, when governments are trying to fight inflation, they increase the average salaries. This is one of the quickest and easiest strategies that can be used as soon as an inflation threat is spotted. Dubai followed namely this strategy by announcing additional benefits for government employees in December 2013. However, private companies are not keen at all to offer increases. On the contrary, the quality of services across all sectors suffer due to cheap labor hiring. Private companies hire less skilled or even unskilled people just because such practice reduces their expenses and allow them to make bigger profits.

Nevertheless, to close a gap you need to balance the numbers. The official inflation which Dubai residents will witness in 2014 is estimated at 4.5% to 5%. On the other hand, there is the nearly double salary increase for government employees and the non-existing increase for the much larger private sector. The difference is really staggering.

A large number of people in Dubai, mostly expats, will not be able to keep up with the rising cost of living triggered by the inflation. Many may prefer to leave or relocate to the still cheaper Northern emirates. Moreover, even if costs manage to stay at the current level, maintaining a family in Dubai is already a difficult and expensive task. In comparison to 2013, Dubai residents with families will certainly need to spend at least 10% more this year.

Let’s take the price of food and beverage, for instance. Last year, it jumped by 4.7% according to the official data. With the new inflation rate estimates, this percentage will be even higher in 2014. Given the fact that food and beverage fall into category ‘everyday expenses’, the blow will be even more painful for Dubai residents.

But the real problem is that costs are rising in all sectors – from real estate to education and everyday expenses and transport. Therefore, people cannot simply reduce their basic budget. Prices in Dubai are increasing without exceptions. As a result, the effect of the rising inflation on Dubai’s residents is that they are left with no room to cut down even slightly their spending. They are forced to either stay in the emirate and do their best to keep up with the spiking costs, or to leave in search for more better opportunities.