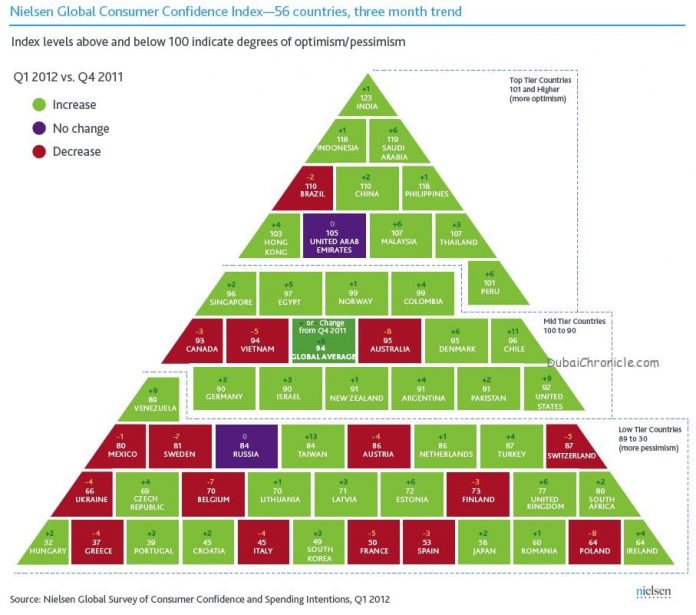 Residents in Dubai see better job prospects in the horizon and expect the local economy to perform stronger over the next 12 months, according to the quarterly consumer confidence survey conducted by the Department of Economic Development (DED) during the third quarter of 2013.

The overall Consumer Confidence Index for July-September 2013 remained constant at 143 points as in the previous quarter, continuing the positive trend that has prevailed in the last five quarters.

While job security was among the major concerns expressed by respondents 83 per cent rated current job prospects as excellent/ good and 92 per cent are optimistic that job situation will improve in the next 12 months.

Growing optimism is also evident in personal finance as 84 per cent are positive on this aspect currently while 94 per cent have a similar outlook for the next 12 months. The survey also indicates a brighter outlook among locals on job prospects and personal finance compared to expatriates.

More Dubai consumers see the state of economy improving in the next 12 months while the percentage of those who believe that the Dubai economy is still under the impact of recession has decreased to 17 per cent from 23 per cent compared to Q2 2013. A major driver of the growing optimism is the tourism boom and the increase in rentals/property prices across Dubai.

Almost 42 per cent of the respondents believe the state of the economy will be ‘Excellent’ during the next 12 months while 73 per cent foresee a strong economic recovery during the same period, as against 67 per cent in the second quarter.

The need to maintain a work/life balance comes next after job security among major concerns expressed in the survey but compared to the previous quarter it is a lesser concern nowadays. Majority of Dubai consumers (86%) also revealed that they are able to cover essential living expenses, despite that the inflation is rising.

Improved control over family budgets seem to be moving up priority charts as two-third of the consumers said they plan to cut down on telephone expenses and save on gas and electricity. More than one-third of consumers said they will stick to such action plans in future.

The Consumer Confidence Index is based on responses to three questions regarding perceptions of local job prospects, personal finances and whether it is good to buy things that people need and want, all over the next 12 months. Responses vary from Excellent or Good to Not so good or Bad.

Conducted in each quarter, the survey gathers feedbacks from 2,000 respondents, equally divided between the four quarters of the year. The respondents come from all major residential communities across Dubai and cover males and females as well as nationals and expatriates, aged 18 to 59.