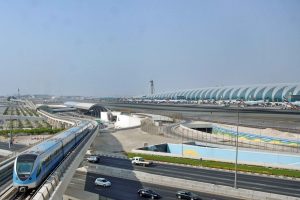 Dubai International’s passenger traffic hit 32.6 million in the first half of this year, making it the busiest six months in the airport’s history, according to the traffic report issued today by airport operator Dubai Airports.

According to the report, Dubai International handled a total of 5.53 million passengers in June, a growth of 17.5 per cent from the 4.71 million who passed through the airport in June 2012.

Following seven consecutive months of five million-plus traffic, the year to date traffic reached 32.66 million up 16.9 per cent from 27.93million in the first half of 2012.

The average monthly passenger traffic recorded in the first six months of the year stood at 5.44 million compared to 4.65 million during the corresponding period in 2012.

In June, the top five country destinations in terms of passenger volumes were India, Saudi Arabia, the UK, Australia and Pakistan. Spurred by the launch of Qantas operations into Dubai in April, Australia (+44.4 per cent) tops the list in terms of percentage growth, followed by Saudi Arabia (+35.0 per cent), the UK (+21.9) and India (+21.0 per cent).

The AGCC continued to top the list of regions with the largest increase in total passenger numbers (+198,779 passengers), followed by Western Europe (+170,782), and the Indian subcontinent (+158,161). South America was the only region recording a fall in traffic (-5,508) in June.

“The first half this year has been very satisfying with double-digit growth across all markets, boosted by the launch of 84 new services to 25 destinations,” said Paul Griffiths, CEO of Dubai Airports.

“A major driver of growth was Emirates airline’s tie-up with Qantas and consequent launch of the Australian carrier’s operations into Dubai. A number of major events are lined up for the remainder of the year – including the opening of the passenger operations at Dubai World Central-Al Maktoum International in October followed by the Dubai Airshow 2013 in November – making the second half even more promising,” he added.

Passenger traffic at Dubai International is expected to surpass 65.4 million in 2013, Dubai Airports said in a statement.