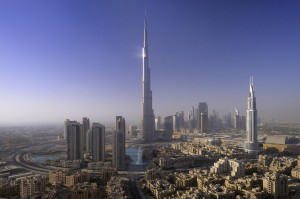 A new Economist Intelligence Unit research report, “Hot Spots 2025: Benchmarking the Future Competitiveness of Cities,” commissioned by Citi, projects that São Paulo, Incheon and Mumbai will see the greatest surge in global competitiveness between 2012 and 2025. Released today at the New Cities Summit in São Paulo, the report forecasts the competitiveness of 120 cities in 2025 based on their projected ability to attract capital, business, talent and tourists.

“Around the world, cities continue to evolve as the centers of innovation and engines of economic growth,” said Citi CEO Michael Corbat. “Core to Citi’s strategy is a focus on the 150 cities we believe will shape the world in the years ahead. The Citi-commissioned EIU research will enhance understanding of the factors driving urban competitiveness and illuminate how the highest performing cities continue to create competitive advantages.”

Dubai moves up to 23rd place overall in the Index. Dubai is one of several cities in the Middle East that are among the top climbers in the overall Index—the others are Doha (24th), Abu Dhabi (39th), Muscat (64th), Kuwait City (63rd) and Riyadh (87th). Dubai is a good all-round performer and improves its ranking in seven out of eight categories. Its competitiveness is in part owing to the fact that the city has been planning actively for a future without petrochemicals for some time. Dubai ranks 44th overall on economic strength, reflecting the rapid growth of its tourism, real estate and financial services sectors. Its low-tax and pro-business economic philosophy continues to attract businesses and people as Dubai attempts to expand its status as a global city and financial and cultural hub of the Middle East and the Persian Gulf region. The city, one of seven emirates in the United Arab Emirates, is making major strides in terms of competitiveness in the categories of human capital (5th), financial maturity (9th), global appeal (31st) and physical capital (37th). Its opaque political system and lack of pluralism and diversity limit progress until 2025 in the categories institutional character and social and cultural character.

Hot Spots of Competitiveness in 2025

São Paulo, Incheon and Mumbai are top movers between 2012 and 2025. Brazil’s commercial and financial capital, São Paulo (36th), is the most improved city in the Index. Its coming surge in competitiveness can be attributed to the city’s young and rapidly growing workforce, solid telecommunications infrastructure, well-established democratic institutions and financial maturity.

Incheon (43rd), South Korea’s third largest city, is the second biggest mover. Investments in a world class port, transportation infrastructure and the development of the Incheon Free Economic Zone have all resulted in the city becoming a commercial, business, logistics and tourism hub for all of northeast Asia, with more progress to come. Incheon’s rise in the overall rankings demonstrates the institutional, social and economic progress that many cities in emerging Asia have made in the last few decades. It also signals the growing competitiveness of emerging market cities that will be seen by 2025 and beyond.

North American and Western European cities retain their competitive edge. Cities in the United States and Western Europe will continue to attract capital, businesses, tourists and talent, despite concerns over aging populations, infrastructure, and lingering impacts of the financial crisis. However, the Eurozone crisis will impact cities in Southern and Eastern Europe, creating a ‘competitiveness divide’ in the region. For example, Madrid (joint 46th), Rome (68th), and Bucharest (80th) all fall in the rankings from 2012 to 2025.

China’s rate of competitiveness eases. No Chinese city is ranked among the top 25 most improved. This is due to the progress that many Chinese cities made during the first decade of this century. By 2025, China will have surpassed the United States as the world’s largest economy, thanks to strong growth, rapid urbanization and rising productivity.

Drivers of Competitiveness in 2025

Size is not a factor. The top 20 most competitive cities in 2025 range from the world’s biggest (Tokyo’s estimated 37 million people) to some of the smallest (Zurich’s estimated population of 1.4 million).

Solid infrastructure is a strong determinant. Physical capital (defined as the quality of physical infrastructure, public transport, and telecommunications) significantly drives competitiveness. Nine of the 10 fastest rising cities in overall competitiveness are seaports or have easy maritime access. For example, the port city and Omani capital Muscat (64th) rises by 14 places, while Saint Petersburg (92nd) – Russia’s trade gateway to the West – rises by 15 places.

Education is also a strong driver. The quality of education feeds into consistently strong productivity and growth, and ultimately city competitiveness. This can be seen in Tel Aviv, where a longstanding commitment to education underpins the city’s competitiveness. Singapore’s focus on improving education also allows it to jump into the top 10 cities in 2025 in the human capital category.