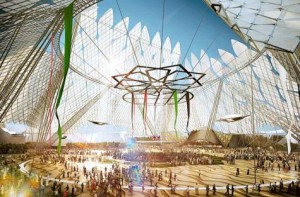 All four candidates for World Expo 2020 hosts had their presentations ahead of the Bureau International Exhibitions’ (BIE) final decision and vote in November this year. Yesterday, the number of the racing cities was reduced to four, after BIE announced it had rejected Thailand’s bid. Today’s presentations are essential for the cities because many of the delegates representing 166 countries who will vote for a winner will decide after hearing the speeches. Each candidate was given thirty minutes to present their basic ideas and themes. During the meeting, Princess Haya spoke about the importance and the power of the World Expo 2020 as an event which meets different people, ideas and innovations. In the same spirit of partnership and cooperation she presented the theme of Dubai’s bid “Connecting minds, creating a future.

Dubai’s presentation was opened by Reem Al Hashemi, Minister of State and stood out with its creative, new initiative called Expo Live which is set to begin next year and continue for tens of years after the end of the world fair. Under Dubai Expo 2020 topics of sustainability, mobility and opportunity, 21 global issues will be identified and solved with the help of governments, organizations, private companies, universities and individuals. The delegation was also joined by His Highness Shaikh Mohammad Bin Rashid Al Maktoum, Vice-President and Prime Minister of the UAE and Ruler of Dubai; Shaikh Abdullah Bin Zayed Al Nahyan, Foreign Minister; and Shaikh Ahmad Bin Saeed Al Maktoum, President of Dubai Civil Aviation, Chairman and Chief Executive of Emirates Airline & Group and Chairman of the Higher Committee for Hosting the 2020 World Expo in Dubai.