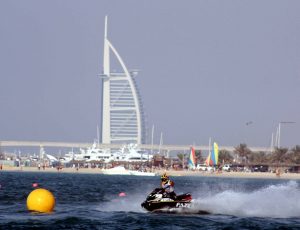 UAE is number one (1st) globally in Government Efficiency and achieved the largest jump in the global competitiveness ranking in this year’s Global Competitiveness Yearbook 2013, issued by the International Institute of Management Development in Switzerland. The UAE is ranked eighth (8th) most competitive nation in the world.

The UAE is also ranked as number one (1st) globally in both Social Cohesion, and the Attitudes and Values. Additionally, the UAE ranked forth (4th) globally in Economic Performance, fifth (5th) globally in the Employment and Sixth (6th) in Management Practices, achieving impressive progression in 19 pillars and becoming among the top 10 most competitive nations in the world.

His Highness Sheikh Mohammed Bin Rashid stated: “Led by the President, the UAE people work together as one team; from Al Sala’a to Al Fujairah, The President cares about every single citizen and he is building a bright future for our entire nation.” His Highness also reiterated that “the continuous collaboration of federal and local government bodies yielded in making the UAE achieve, in one year, the highest ranking jump, and becoming the eighth (8th) most competitive nation in the world and number one (1st) globally in Government efficiency.” “This accomplishment is the fruits of labor of thousands of teams, in both federal and local government departments across the entire UAE, and constitutes a very clear message to the world that the UAE people will settle with nothing less than being number one,” added His Highness.

His Highness also stressed that such an accomplishment will require even further effort and hard work from everyone, and directed the unification of all efforts to fulfill Vision 2021 for the UAE to be among the top nations in the world in all fields and aspects. His Highness also added that he is very optimistic in the UAE people’s capability to fulfill Vision 2021 before its due date.

His Highness was also pleased with the progress that the UAE is making in the report and in achieving number one rank globally in both Social Cohesion and Government Efficiency; and that this achievement is an indication to the balanced and impartial nature of our development drive.

His Highness also indicated that the UAE has great ambitions and that the coming two years will witness a number of major developmental initiatives that will impress the world and take the UAE to whole new levels of developmental and economic performance.

Commenting on the overall competitiveness report, His Highness concluded “I am very optimistic about our future, confident in our people, and we will keep the hard work going. Our goal is and will always be the prosperity of the UAE people.” The Swiss-based IMD’s Global Competitiveness Yearbook is one of the most comprehensive annual global reports on nations’ competitiveness and is widely consulted by policy makers, businesses and investors alike. The World Competitiveness Yearbook ranks and analyses countries on the basis of over 300 criteria both hard and survey-based data on how they use their resources to increase prosperity including economic growth, environmental concerns and quality of life.

The main drivers of UAE’s improved rankings include impressive advances in all the major quadrants measured by the report Government Efficiency, which UAE jumped from last year’s 3rd place to this year 1st globally, Economic Performance, where UAE moved up 7 ranks to become forth (4th) globally, Business Efficiency which UAE is currently ranked ninth (9th) globally after an impressive ten spots jump from 2012 ranking.

And in addition to the UAE performance improvement in all the report quadrant, the UAE has seen remarkable improvement in the majority of the sub-pillars of the reports key areas including Employment (Up to 5th from 15th), Management Practices (Up to 6th from 21st), Domestic Economy (Up to 8th from 13th), and Societal Framework (Up to 8th from 15th).