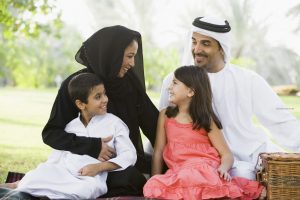 Immaturity and false expectations seem to be the main reasons for the increasing number of divorces among Emiratis, according to psychologists and social workers. Dubai courts recorded a 26 percent rise in divorces in 2012 in comparison with the numbers from the previous year, and the average age for marriage had also risen drastically.

A 2012 study conducted by experts from Zayed University revealed that birth rates had dropped from seven children in ach family in 1970’s to only two in 2012. At the same time, the average age for marriage, for both men and women, had jumped from 20 to 26, and many men would even prefer to become husbands between 30 and 35. While Emiratis are getting married at an older age, this doesn’t mean maturity. During a forum on the healthy marriage, Director General of the Dubai Foundation for Women and Children, Afra Al Basti, explained that a large part of the newlyweds in Dubai have a wrong idea about the concept of marriage. As a result, the number of divorces among Emirati nationals in Dubai has also risen.

Sharia courts in Dubai issued 1,100 divorce certificates in 2012, which is 26 percent more from the divorces in 2011. This trend, however, is not new to the emirate. Only in Mrs Al Basti’s office, there were 1,117 marriages in 2011, and 377 divorces the following year. In 2006 and 2007, around 80 percent of couples filing for divorce, actually decided to split in the first year of the marriage. This can only indicate that the main reason for divorce is immaturity, Basti says. Speakers and audience at the forum expressed their visions for a healthy marriage, and the discussed the problems of splitting. Mrs Ahmad pointed out that marriage satisfaction depends on the individual expectations and planning for the future. Furthermore, today couples expect too much of their future life together, because values and ideas have changed.

Another theme during the forum was gender and social inequality and the fact that there is too little in common between young men and women in the country. There isn’t normal interaction between genders, according to Dr Suad Al Marzooqi, psychologist and assistant dean at UAE University. Open communication in the family – between spouses, and between parents and children, should help solve this problem. While some people argue that lots of marriages are doomed to fail from day one because are arranged or being of convenience, this is rarely the real reason. The fact that you don’t know the person is certainly a factor leading sometimes to unpleasant surprises, but the cases show that most divorcees blame silence and poor communication within the relationship for the splitting.