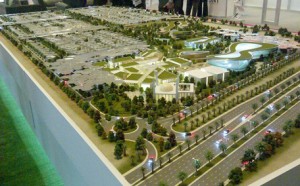 The construction of Dubai’s new grand project, Dubai Sustainable City was officially announced on Tuesday during the International Property Show. The modern eco-friendly city will offer property owners no service charges and utility bills, as well as the opportunity to generate and sell their own electricity.

Dubai Sustainable City is located north of Arabian Ranches Phase 2 Casa Project, near the intersection of Emirates Road and Al Qudra Road. The project covers 46 hectares and has 550 residential villas, 20 organic farms, university and 5,000 square feet long water canal. There will be an integrated system for waste recycling and solar farms covering 600,000 square feet, which is what makes the city sustainable. The city is both residential and tourism area which in its final phase will include a spa and a resort, a green school, and tourist attractions such as a grass amphitheater and a planetarium. Each of the houses will have a solar panel on the roof which will provide residents with around 60 percent of their overall energy needs. Another part of the green project is the smart water system which, according to plan, will reduce the water demand of houses by 30 percent. Grey and waste water from the kitchen will be used for irrigating plants, flowers and greenery in the city.

The project belongs to private Dubai-based developer Diamond Developers. The design of the city, however is coordinated with the Dubai Municipality to ensure meeting all standards. It is also perfectly in line with the Government’s plan to reduce UAE’s dependency on gas and current trend of building ecologically in the region. While gas now provides around 99 percent of all the energy needed in the country, by 2030 the percentage should be reduced to 71.

The construction of the first phase of Dubai Sustainable City will begin in July and the first 100 houses or villas will be ready by 2014. The project is planned to be complete around the middle of 2015. According to the plans, the city will be also a car-free zone where residents will be given solar-powered golf carts for transportation.

International Property Show 2013 kicks off in Dubai on April 30