The total office space stock within areas of Dubai monitored by a real estate investment advisory firm JLL stood at approximately 7 million sq m at the end of Q1 2013. 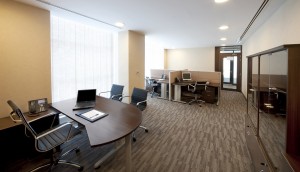 The first quarter of the year saw an additional 145,000 sq m of office space entering the market. New completions include the Conrad Tower on SZR, two buildings in Logistics City, part of Dubai World Central, Grosvenor Business Tower and Iranian Business Tower in Business Bay and the S.I.T project in Silicon Oasis.

According to developers, there remains around 1.0 million sq m of office supply that could enter the market before the end of the year, says JLL. However, some of the proposed space might be postponed beyond 2013. The majority of new office supply will be located in Business Bay, followed by DIFC, Dubai World Central, JLT, SZR and Dubai Investment Park.

With confidence gradually returning to the real estate market, some previously stalled projects are re-starting, such as the Central Park project in DIFC and the Dubai World Trade Centre District.

The potentially significant new office supply in Business Bay over the next two years could be reduced as some projects in the area are being converted from office to residential use.

The share of office stock located in freezones increased with respect to previous years, supported by less stringent restrictions on occupancy. As of Q1 2013, around 47% of office space was located in free zones with the remaining 53% in onshore areas.

Single ownership buildings constitute the majority of the existing office stock (60%) while the remaining (40%) is strata space. Strata buildings in locations such as TECOM C, JLT and Business Bay remain less popular and continue to display higher vacancy rates. There was however an increase in demand for strata space for sale from smaller local companies noted in Q1 2013.

With market confidence and optimism improving, demand for office space is picking up.

Activity remains focused on prime buildings in the top locations, while demand for dated and poor quality space continues to be weak. The market continues to see a “flight to quality” as occupiers is relocating from the old areas to New Dubai.

With demand increasing, more space has been committed. A good example is Boulevard Plaza by Emaar in Downtown, although around 30% of the space in this project remains physically vacant, much of this has been committed and is no longer available within the market.

Jones Lang LaSalle is aware of approximately 190,000 sq m of current potential demand for office space. Professional Services firms account for 38% of total active tenant demand, followed by energy (12%), and telecoms (11%). Most demand continues to result from existing tenants with few new entrants to the market.

Demand continues to be driven by portfolio optimization, especially among global occupiers. However, the emphasis is now shifting from reducing the floor space to a more efficient use of the space available.

Global corporates aim to achieve an occupational density of 7 or 8 sq m per person. This is often not achievable in Dubai, as the design and floor plate of most buildings in Dubai do not allow for efficient space utilization. In general, ratios of 9 or 10 sq m per person are the best that can be achieved in the Dubai market.

A number of cash-rich global corporates are today increasingly looking to allocate investment on new fit outs and refurbishments.

Increased leasing activity is now being reflected in the growth of rental levels within the Dubai office market. The rise in asking prices, noticeable during the last six months, has now been translated into an increase in the dealing rents. Average headline dealing rents in quality office buildings in selected areas have seen a rise of 10% Q-o-Q.

The improvement in average dealing rents during Q1 2013, reflects the recovery of demand and therefore rentals in some new but previously largely unoccupied buildings.

Prime locations such as TECOM A&B, SZR and Burj Downtown have all seen increase in their rental values. Business Bay has also witnessed an increase in popularity recently as more of the area’s infrastructure has been completed.

Landlords have become firmer on rents in the most prime locations but remain flexible elsewhere, offering rent-free periods to attract tenants to fill unoccupied buildings.

As the “flight to quality” continues, older areas continue to suffer from lower occupancy rates while the newer buildings in areas such as Business Bay, Downtown and even Jebel Ali, are filling up.

Vacancy rates within the CBD remained flat at 31% in Q1 as the take up was in line with the new supply entering the market. However, vacancy rates are expected to decline in the coming quarters driven by stronger demand.

While the office market appears on a recovery path, it is important to note that growth remains concentrated within prime buildings and is not being experienced in secondary and lower quality office space.