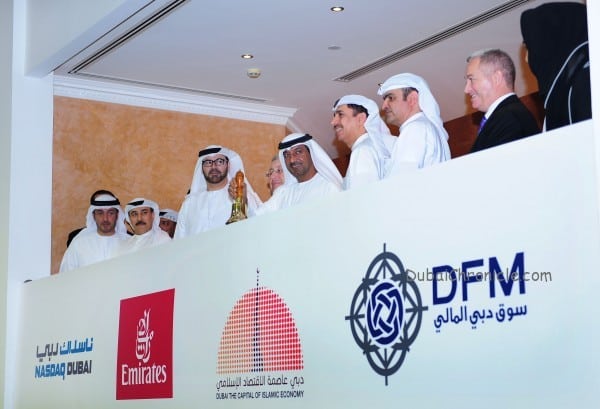 The listing of the one billion dollar Sukuk supports Dubai’s intensive efforts in this regard after the launch of (Dubai the Center of Sukuk) initiative by His Highness Sheikh Mohammed Bin Rashid Al Maktoum, UAE Vice President, Prime Minster and Ruler of Dubai and in line with His Highness’s vision to position the Emirate as the capital of Islamic economy globally. It brings the nominal value of Sukuk listed on Dubai exchanges to 10.625 billion dollars, the third largest total in the world.

The Sukuk issued by Emirates, one of the fastest growing global airlines, was sold successfully to investors in MENA, Europe, Asia, and some offshore U.S. accounts.

His Highness Sheikh Ahmed Bin Saeed Al Maktoum said: “As an international exchange, NASDAQ Dubai gives our listing global visibility whilst at the same time providing us with a listing in the city where we are based. The exchange’s high regulatory standards and streamlined listing procedures make it an ideal venue for listing capital-raising securities.”

His Excellency Mohammed Abdulla Al Gergawi, Chairman of The Executive Office of His Highness Sheikh Mohammed Bin Rashid Al Maktoum, UAE Vice President, Prime Minister and Ruler of Dubai, and Chairman of the Higher Committee for development of the Islamic Economy sector said: “As the expansion of the Islamic Economy gathers pace, the Emirates Sukuk provides further evidence of Dubai’s excellence as a centre for issuing, listing and trading of Islamic capital-raising securities after the successful listing of DEWA Sukuk last week. We will continue to strengthen the leading position of the UAE in this sector through various efforts and the creation of a range of world-class Islamic financial products, for both institutions and individuals.”

Essa Kazim, Managing Director and Chief Executive of Dubai Financial Market (DFM) and Secretary General of the committee said: “Dubai’s capital markets are growing rapidly in scope and sophistication, with Islamic finance playing a leading role. The issuance of the Emirates Sukuk, and its listing on NASDAQ Dubai, demonstrate the strength of Dubai’s financial markets architecture and its ability to serve leading international companies.”

Abdul Wahed Al Fahim, Chairman of NASDAQ Dubai, said: “This listing by one of the world’s leading airlines is an important step towards NASDAQ Dubai’s goal of becoming the largest exchange in the world for Sukuk, by listed value.”

“We look forward to welcoming Sukuk issuers from around the world as well as our own region, as the asset class grows in popularity among investors of all types and in all areas of the globe. As well as providing a listing venue, NASDAQ Dubai plans to expand the range of services that it offers to Sukuk issuers and investors.”