Despite moderate global growth in advertising spending, fast-moving consumer goods (FMCG) companies continued to invest—and invest more, according to Nielsen’s quarterly Global AdView Pulse report. The largest sector by ad spend market share, with roughly a quarter of all dollars spent (25.1%), FMCG saw a six percent increase in ad spend in 2012 through September. FMCG was joined by telecom, media and automotive as the top sectors for year-over-year ad growth.

FMCG: FMCG spending grew most in Q3 (9.6%), driven largely by increases in food and drink advertising. Advertising in the Middle East and Africa contributed significantly to these gains, with a regional year-to-date increase in FMCG spending of 41 percent.

Media: Within the media sector, broadcasters spent 8.3 percent more in ad spending for 2012 to date. This jump may be in part due to an increase in broadcasters advertising on their own channels, as they promote their content and fill spots not sold to other advertisers.

Automotive: Q3 is traditionally big for the automotive industry, as the sector saw a 6 percent increase in the first three quarters of 2012 over the same period in 2011. 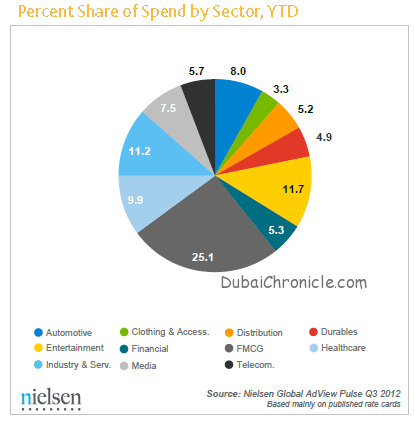