As hotel industry is rapidly expanding in Dubai, the emirate’s hotels and hotel apartments played hosts to 5,027,223 guests in the first half of this year, an increase of 10% over the corresponding period in 2011. 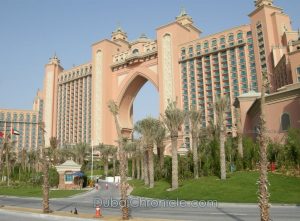 Khalid Bin Sulayem, Director General, Department of Tourism and Commerce Marketing in Dubai (DTCM), made the announcement at the sideline of the annual Natalie Tours Congress, the 8th in a row, which kicked off on Monday at the Atlantis Palm hotel, Dubai, with focus on the significance of the Russian market to Dubai, and the best ways to boost up tourist relationships.

The five-day conference, being run by Natalie Tours, the biggest tourist company in the Russian market, in collaboration with the Alpha Tours , is to see the participation of 250 tourist companies from across Russia.

In his inaugural speech, Khalid Bin Sulayem, Director General, Department of Tourism and Commerce Marketing in Dubai (DTCM), said the event is a good chance to update guests’ information about Dubai tourist attractions and mega projects, and best promote the emirate in the Russian market.

Present at the function, being hosted by the Atlantis Palm hotel, for the 4th consecutive year, were Natasha Vorobieva, CEO AND gm – Natalie Tours, Ghassan Al Aridi, CEO – Alpha Tours , Brett Armitage, Senior Vice President , sales, Atlantis, as well as a number of DTCM senior officials and events managers from both companies.

Hailing bilateral relationships between Dubai and Russia in terms of tourism, Bin Sulayem said Russia is one the most important tourist markets to Dubai.

Bin Sulayem indicated that DTCM has always been very keen on participating in all tourist fairs and exhibitions in Russia. “These span the Moscow Autumn Travel Industry Week or ‘Leisure 2012’, in which we won three awards.” Echoing the same, Ghassan Al Aridi, CEO – Alpha Tours , said the event this year is quite different. “This congress, we have the pleasure to host the best of the best tourist companies promoting Dubai in the Russian market.” Noting that Russia is one of the most important five markets to Dubai in terms inbound tourists and sales, Al Aridi said the Russian tourist is atop the list of the most spending tourists worldwide.