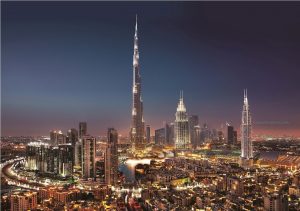 Since property investment for foreigners was approved in 2002, Dubai experienced a boom in its real estate industry. The newly liberated real estate sector attracted investors of all kinds and nationalities until the global recession of 2008stormed in and lack of liquidity and confidence hit hard the emirate. By that time, the Dubai property boom had already turned into a speculative bubble full of shady operators many of whom later ended up in prison or remain at large with investors’ money.

The real estate sector since then is in a process of consolidation, downsizing and rationalization.

However, the Dubai property market recently shows some minor signs of recovery. Oversupply inventory is moderate and construction of some frozen projects was restarted earlier in the year, although fully completed buildings still remain not operational.

Civil unrest in North Africa and the Middle East drew many new expatriates to settle in Dubai since the beginning of 2010. This helped rents to remain relatively stable in the best locations. A recognizable shortage of villas causes small increase of between 2% to 5% of the selling prices. Rentals and property prices have generally stabilized mainly in well established communities.

The situation in the real estate industry in Dubai today is not so different than it was back in 2003 and in the beginning of the past property boom.

Insiders from Emaar Properties’ agents department told DubaiChronicle.com that the current situation resamples the beginning of the past property boom. They said they receive 1 or two agents applications on daily basis and plenty of sales inquiries.

Independent real estate brokerages say that they receive much more new inquiries since the beginning of September. On the other hand, the population of Dubai continues to grow at fast pace. More jobs are advertised now than before, and in particularly from within the service industry.

There is a potential geopolitical crisis on the horizon in the form of the possible conflict around Iran. Dubai will once again benefit from its status of safe haven and attract even more rich people from the region who are looking for secure and comfortable future.

Elsewhere, the US Federal Reserve announced its plans to preserve interest rates low until at least mid-2015. Now, this suggests that borrowing cost for US dollars and pegged currencies will remain cheap enabling more people to take mortgages to buy homes.

In addition, higher oil prices suggest higher revenues for U.A.E. and this means that government will spend more on infrastructure and services in order to attract new investors and to employ more expatriates.

Dubai making the headlines in a similar fashion to world’s largest metropolises, definitely has the potential to benefit from the globalized trends for investment in real estate.