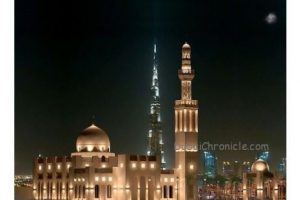 A built-up area of nearly 15,000 sq ft, the mosque will be designed in elegant traditional architectural style and is set to become a cultural landmark for the city. It will feature prayer halls for men and women, and a Holy Quran study room. With construction underway, the mosque will be set in an immaculately landscaped area that will complement the design elegance of The Old Town.

To be situated behind Qamardeen Hotel, the mosque will be easily accessible not only to the residents of Downtown Dubai and Business Bay but also for visitors, and is in proximity to Burj Khalifa and The Dubai Mall. In all, the mosque can accommodate approximately 800 people, including a dedicated prayer hall for over 85 women, along with designated parking spaces.

Ahmad Al Matrooshi, Managing Director, Emaar Properties, said: “We are thankful to His Highness Sheikh Mansour Bin Zayed Al Nahyan for the opportunity to host this mosque in Downtown Dubai. The mosque will be designed to reflect the rich traditional architectural heritage while serving as a haven of peace and serenity and is set to become a modern day cultural landmark for Dubai.”

The mosque further complements Emaar’s commitment to develop fully integrated communities that offer the full spectrum of lifestyle amenities for residents and visitors. It will serve the thriving residential community in Downtown Dubai, as well as visitors from all over the region who visit the lifestyle destination described as ‘The Centre of Now.’

Anchored by Burj Khalifa, the world’s tallest building, Downtown Dubai will soon also host the Dubai Modern Art Museum & Opera House District, which is billed to become the cultural referral point for the city. The mega-development of Emaar includes The Dubai Mall, Souk Al Bahar, The Dubai Fountain and several homes and offices.