Facebook executives are hoping the company’s first office in the Arab world can help boost sales even as its share price struggles. Many other  international companies recently entered the Middle Eastern IT market with high hopes for quick revenues from online advertising, without consideration of the region’s relatively small population, the cultural differences and the limitations related to censorship. Few closed down during the first six months of operations, while others continue struggling with weak or almost non-existant  revenues.

Back to the social networking company, it seems Facebook is also testing the weather as the office in Dubai Internet City  will start out with a staff of three employees only. The company aims to attract more advertising revenue directed at the 45 million users that says it has in the Middle East and North Africa.

The launch of the new office follows Facebook’s IPO debut in the United States, which was one of the most anticipated stock offerings in history. The stock had lost 24 percent of its value ahead of the Dubai’s office launch. All kinds of rumors had emerged ever since, including that the fair price for Facebook shares is in the range of US $14. Time will show us what would be the market price.

Joanna Shields, Facebook’s vice president and managing director for Europe, the Mideast and Africa, says employees are “just getting on with” their work despite the share price slide. Launching by the end of May is not very promising, with the summer season well-known as slow for business in the Middle East due to the high temperatures. 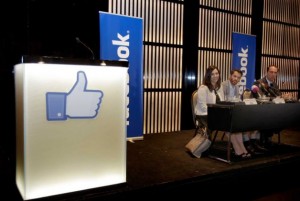 The local operations of the social network will be led by Jonathan Labin, Head of Global Marketing Solutions, Middle East and North Africa at Facebook. Mr Labin said: “I am thrilled to be leading the team in Dubai. We already have strong partners in the region that are using Facebook in innovative ways to achieve real results. I look forward to working with many more businesses to help them extend their reach and realize the power of social.”