Burj Khalifa, the world’s only ‘Global Icon’ and the civic pride of the city of Dubai, now has a monument saluting the international collaboration that marked the accomplishment of the world’s tallest building. Emaar Properties, the developer of Burj Khalifa, has unveiled ‘The Burj Monument,’ 18 metres high and in stainless steel, in Downtown Dubai, near The Dubai Mall. 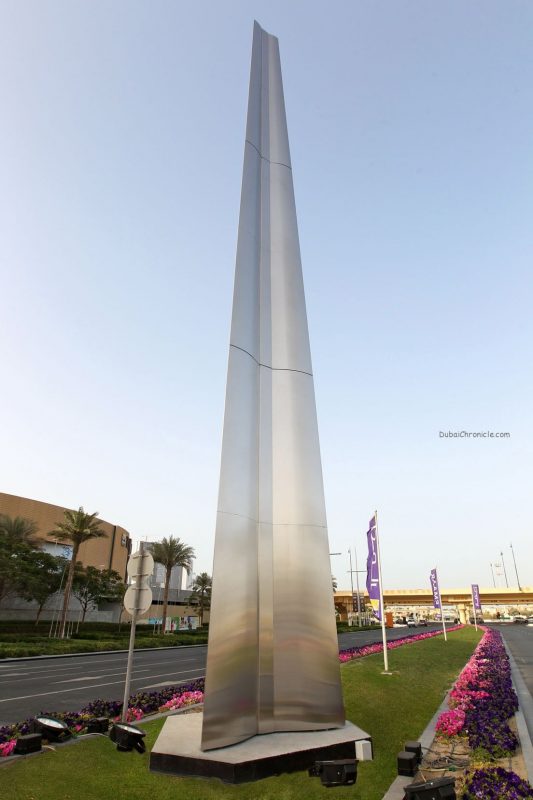 Located strategically on a visual plane aligned with the awe-inspiring magnificence of the tower, the monument draws its design inspiration from the three-core structure of Burj Khalifa, originally based on the floral architecture of the desert flower, Hymenocallis.

An architectural art that adds to the sculptures and art pieces in Downtown Dubai, The Burj Monument welcomes visitors to the 500-acre community, and serves to remind them of the global collaboration that has gone into making Burj Khalifa.

Engineers, designers, architects and skilled workers from more than 100 countries were involved in the making of the tower. At its peak of construction, there were more than 12,000 dedicated personnel on site ensuring the seamless progress.

The monument is also a token of gratitude by Emaar Properties to the people of Dubai and visitors from around the world, who have enabled the transition of Burj Khalifa from ‘History Rising’ to ‘A Living Wonder.’

Mr. Mohamed Alabbar, Chairman of Emaar Properties, said: “Two years ago, with the grand inauguration of Burj Khalifa, Dubai demonstrated to the world that where there is determination, dedication and a clearly defined objective, we can push the boundaries of what humanity can achieve.

“In accomplishing Burj Khalifa, we had the unwavering support and encouragement of His Highness Sheikh Mohammed Bin Rashid Al Maktoum, UAE Vice President & Prime Minister and Ruler of Dubai, who in fact inspired us to develop the world’s tallest building.

“We were fortunate to work with some of the world’s brightest minds in engineering, architecture, construction and design, on the venture. We also had the blessings of the people of Dubai, who welcomed the initiative and associated with it as an object of the city’s civic pride.

“The Burj Monument is our token of gratitude to everyone who has helped us accomplish the project, and a reminder to every visitor to Downtown Dubai that Burj Khalifa is a true reflection of what Dubai stands for – a global city that welcomes the world.”

Much like Burj Khalifa, the Burj Monument also has a triple-lobed footprint, an abstraction of the six-petalled desert flower, Hymenocallis. The structure rests on a marble-clad base with three individually tapered and curved wings. While the inner skeleton of the monument is made of hot dip galvanized seamless steel pipes and stainless steel cleats, the cladding is brush finished stainless steel.

At 828 metres (2,716.5 ft), the 200 plus storey Burj Khalifa has 160 habitable levels, the most in any building in the world. The tower was inaugurated on January 4, 2010, to coincide with the fourth anniversary of the Accession Day of His Highness Sheikh Mohammed Bin Rashid Al Maktoum as the Ruler of Dubai.

Downtown Dubai, anchored by Burj Khalifa, is one of the most prestigious lifestyle communities that features The Dubai Mall, the world’s largest shopping and entertainment destination which welcomed more than 54 million visitors in 2011; and The Dubai Fountain, the world’s tallest performing fountain, in addition to luxury hotels, homes and offices. The development also features one of the city’s popular galleries, The Pavilion. The 3.5 km long Emaar Boulevard hosts regular lifestyle events such as the popular Emirates Classic Car Show Festival.