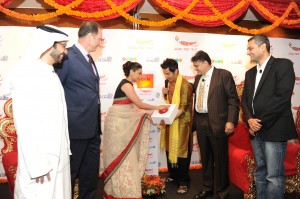 Abu Dhabi Media and Entertainment Network (India) Limited, a subsidiary of The Times of India Group, have spiced up the airwaves in the Emirates today with the launch of India’s largest FM brand, Radio Mirchi.

Bollywood superstar, Rani Mukherjee, known for her award-winning acting performances, was in Abu Dhabi for the launch celebration today and joined the Abu Dhabi Media and Radio Mirchi teams to push the launch button, making the station go live across the UAE.

Malcolm Wall, CEO of Abu Dhabi Media, commented: “The addition of Radio Mirchi to the Abu Dhabi Media portfolio is a significant step for the company. Through this partnership, we have introduced a new target demographic for Abu Dhabi Media that will complement our existing Arabic and English language radio brands. The south Asian community is an important audience here in the Emirates, and Radio Mirchi provides a powerful platform for brands to reach this large and rapidly growing consumer group.”
“Mirchi” is Hindi for chilli, and Radio Mirchi is renowned for being the hottest radio station in India. The brand brings the authentic taste of Desi radio to the UAE, and offers the same award winning mix of content and talent that has kept Indian listeners tuning in for years, packaged specifically to suit the diverse needs of the Emirates’ south Asian audience. 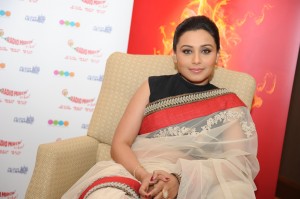 Prashant Panday, CEO of Entertainment Network (India) Limited, also commented: “In India, we are proud to have over 40 million listeners who swear by our brand. Radio Mirchi is known as the gateway to Bollywood and our UAE launch brings the best of the brand and our unique programming innovations to the people of the Emirates. From the biggest heroes, heroines and directors, to the most popular music composers, lyricists and singers- the station has it all.

“Our first foray overseas is a significant step in the evolution of the Radio Mirchi brand and a landmark event for the company, and we are happy to partner with such a well known and reputed company like Abu Dhabi Media,” added Panday.

With a fun and dynamic lineup of shows throughout the day, there is plenty to keep listeners entertained and engaged. With international and community news, the hottest music and unrivalled access to Bollywood- all broadcast in a mixture of Hindi and English with a unique flavor from home- Radio Mirchi is sure to inject sunshine and energy into its listeners’ days.
“Abu Dhabi Radio Network is continuously striving to serve the needs of all our communities in the UAE, and the launch of Radio Mirchi will cater to a new audience for the company,” commented Abdul Rahman Awadh Al Harthi, Director of the Abu Dhabi Radio Network. “We are thrilled to bring such a premium brand to the UAE for the first time – the addition will be a real asset to our suite of radio brands and will once again extend Abu Dhabi Radio Network’s reach across the all of the Emirates with its nationwide frequency.”

Radio Mirchi has been the pioneer of private FM radio in India since its launch in 2001, and with a presence across 14 states with 32 stations, it is the largest FM channel in the country.

Mirchi Mornings– Every morning from 6 am to 11am: Wake up to Mirchi Mornings with RJ Aashi and RJ Prateek as they prep you for the day ahead with a fun take on news from around the world, peppered with Bollywood updates and the hottest songs from across the decade.

Mid-day Mohabbat– Mid Mornings 11am to 2 pm: Single girl around town, RJ Yachna is the one friend every homemaker needs. From quick fixes around the house, colors for the day, to figuring out your online-banking, coupled with great music and trivia from the 90s, RJ Yachna is the super-girl you want to be best friends with!

Total Filmy- Afternoons 2 pm to 5 pm: Get your daily dose of films with Total Filmy. The hottest Bollywood stars, the latest interviews and reviews on movies from a M.B.E graduate (Masters in Bollywood Entertainment!), RJ Anoop. Tune in to know everything there is to know- from gossip, to new releases, to trivia contests – it all happens first on Bollywood’s very own radio station!

Bumper to Bumper– Evenings 5pm to 9 pm: Driving back home, Bumper to Bumper, is where RJ Shardul and RJ Sukriti keep your traffic woes at bay! Giving you a look at the day gone by, they make sure you get to unwind with the latest hit songs, Bollywood specials and news from around the world.

Classic Retro– Late evenings 9 pm to 12 am: Settle in for three hours of classic retro with a treasure trove of trivia and stories that transport you to the golden era of the Hindi film industry with RJ Fahad. From Dilip Kumar, to Dharmendra. Raj Kapoor, to Rishi Kapoor. Legendary writers, actors, light men – all brought to life beautifully with couplets and poetry to set the mood.

Mirchi Weekends: With your weekends programmed differently and tie-ups with the best DJs and clubs in UAE – you just have to tune in to make sure your weekends are truly Mirchi!