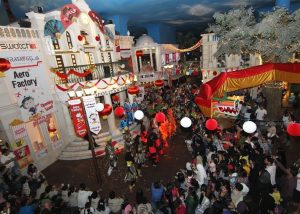 The colours of the world, drawn from all the seven continents, will come alive at KidZania, the award-winning children’s edutainment centre managed by Emaar Retail LLC in The Dubai Mall, this month.
Marking the second anniversary of the children’s city, which offers the little ones over 80 professional role plays that simulate real-life professions, the ‘Colours of the World’ celebration at KidZania will be held all month until February 5, 2012, coinciding with Dubai Shopping Festival, the region’s largest shopping and entertainment extravaganza.

To mark the second anniversary celebration of ‘Colours of the World,’ KidZania will demarcate the 80,000 sq ft interactive mini-city into seven zones with the entrance to be themed after Africa; and various other ‘businesses’ in the children’s city themed in the décor of Europe, South America, Australia, North America, Asia and the Middle East, and Antarctica.

KidZania’s own ‘National Company of the Arts,’ will also will regale audiences every weekend with ‘The Dance of Colours’, featuring cultural dance performance from Africa, India, Latin America, Morocco and the Philippines.

Young visitors to KidZania also stand to win in just 22 seconds a ‘Treasure Chest’ of up to 2,222 KidZos, the ‘currency’ of the children’s city that opens doors for the little ones to the varied attractions within KidZania. They can alternatively save the KidZos in the ‘bank’ and return for another fun-filled day at the leisure destination.

KidZania is also offering special family packages for the second anniversary to meet the strong interest from visitors, especially during the Dubai Shopping Festival season. The child and adult packages offer visitors various F&B and retail choices, and souvenir photographs from KidZania®.
Mr Ric Fearnett, Mayor, KidZania Dubai said: “As the region’s largest retail and entertainment event, the Dubai Shopping Festival adds tremendous value to the Dubai economy with its economic impact spread over all key sectors including retail, leisure, hospitality and tourism. KidZania® is adding more colours to the festival, with our second anniversary celebration, a must-visit attraction this season for Dubai’s residents and tourists.”

Located on level 2 of The Dubai Mall, KidZania is one of the most-visited leisure destinations for children, with an array of convenient options for parents to spend a relaxed time as the youngsters discover the joy of learning about real-life professions through hands-on activities.

On any day, KidZania lends wings to the dreams of the little ones, as they enact the roles of pilots, doctors, healthcare professionals, civil defence personnel, police officers, reporters, photographers, engineers, fashion designers, and artists, among others.

KidZania® provides a safe, unique and very realistic educational environment that allows kids to do what comes naturally to them: role-playing by mimicking traditionally ‘adult’ activities. It features offices, university, fire station, race track, radio station, pizzeria, hospital, bank, theatre and ATM machines, among others, all scaled down to a smaller, child-friendly size. Children dress up in real-life uniforms and perform realistic professional tasks in a fun and meaningful way.

KidZania® regularly introduces new ‘professions’ and new marketing partners to the children’s city, thus offering young visitors the opportunity to further enhance their edutainment experience, apart from adding to the novelty value.
The children’s city has brought a clear differential to the educational environment of the UAE by winning the approval of the UAE Ministry of Education for field trips as part of the academic curriculum. Winning the Image Retail ME Award as ‘Most Admired Retailer of the Year – Leisure & Entertainment,’ KidZania® won the award for ‘Innovation in Retail’ at the Retail City Awards 2011.

The winner of the Superbrands 2011 laurel, KidZania was ‘Highly Commended’ at the Global Retail & Leisure International (RLI) Awards in the ‘Most Innovative Retail and Leisure Concept of the Year Award’ category and was also a finalist at the Cityscape Awards for Architecture 2011 in the ‘Leisure – Built’ category.