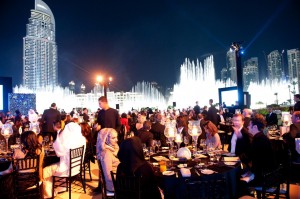 UAE-based philanthropic organisation, Dubai Cares, and global development and aid agency, Oxfam, revealed that the recent charity auction hosted by the Dubai International Film Festival and luxury Swiss watch manufacturer IWC Schaffhausen during the 8th edition of the Festival proved to be an overwhelming success, generating more than US$1 million. All proceeds from the auction, which featured an exciting array of treasured celebrity items and experiences, went to Dubai Cares and Oxfam.

The charity auction and gala dinner was held under the patronage of UN Messenger of Peace HRH Princess Haya Bint Al Hussein, wife of HH Sheikh Mohammed Bin Rashid Al Maktoum, Vice-President and Prime Minister of the UAE and Ruler of Dubai, at the Armani Hotel in Dubai.

In addition to several local and regional Arab celebrities such as Emirati filmmaker Ali Mustafa, Egyptian film star Amr Waked and many others, the event was attended by a host of international celebrities including singer Ronan Keating who performed with his band, the Hollywood star Owen Wilson and Oxfam ambassadors Danish fashion model and photographer Helena Christensen, Indian actor and social activist Rahul Bose and VIPs from the UAE, Arab world and internationally.

Tariq Al Gurg, Chief Executive Officer of Dubai Cares, said, “During the charity gala, members of the UAE community extended their generous support to the needy around the world – it was truly a testament to the spirit of philanthropy that exists here in the UAE. The money raised will support Dubai Cares primary education programmes that are currently reaching 5 million beneficiaries in 24 developing countries around the world, giving more children and their communities hope to turn their dreams into reality. We are grateful to HRH Princess Haya Bint Al Hussein, the Dubai International Film Festival and IWC Schaffhausen for providing this wonderful platform and to our donors for their support.” 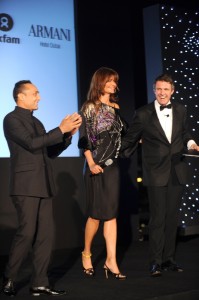 Oxfam Chief Executive Dame Barbara Stocking, said, “We are delighted by the overwhelming success of this auction which has raised valuable funds for Oxfam’s life-changing work around the world; and are very grateful for the generosity shown by the people of the UAE. We sincerely appreciate the support extended to us by HRH Princess Haya, the Dubai International Film Festival, IWC Schaffhausen, and by the many celebrities and Oxfam ambassadors who have helped to make this auction such a wonderful event. We hope that this charity gala is the first of many such successful initiatives in the region.”

Among the unique celebrity items auctioned were two tickets to the world premiere of The Avengers, donated by Scarlett Johansson, in addition to an opportunity to meet Scarlett at the premiere. This fetched US$20,000. A stunning, handcrafted jewellery piece that was co-created by Livia Firth to wear to the Golden Globes, where husband Colin won the Best Actor award, was auctioned for US$25,000. This bespoke item has been created entirely from precious stones, set with over 400 black diamonds, rubies, purple spinels and South Sea pearls in 18ct white gold, and is ethically- and sustainably-sourced. 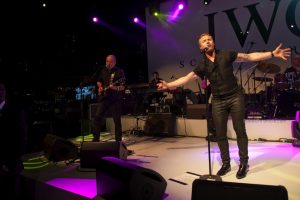 An exciting Alec Baldwin experience auctioned for as much as US$14,000. As part of the package, two people will be flown to New York to stay in a luxury hotel. They will later enjoy a private yoga class with Alec Baldwin, taught by his partner Hilaria Thomas at the Yoga Vida centre in New York.

The Varkey GEMS Foundation supported the evening by funding 10 schools in Pakistan, a contribution of US$300,000, while other supporters and buyers from the event confirmed funding 14 other schools. All donations for funding a total of 24 schools reached to US$710,000.

The Varkey GEMS Foundation is a not for profit education Foundation and is the philanthropic arm of GEMS Education, the largest kindergarten to grade 12 private education operator in the world. Spokesperson for the Varkey GEMS Foundation, Dino Varkey, said, “It was a privilege to support such a worthy cause. When an underprivileged child is provided with access to education it is not only the child itself that is positively impacted but his or her family and the broader community.”

DIFF Chairman Abdulhamid Juma, said, “It was wonderful to see the great response generated by this charity auction, which illustrates the genuine commitment of the people to make a difference to the lives of those less fortunate. With the proceeds of the auction going to the valuable work of Dubai Cares and Oxfam, everyone involved, especially the buyers, can be assured that every single dollar raised will be used to benefit someone in need.”

Oxfam is an international confederation of 15 organisations (from Europe, North and Central America, Asia and Oceania) working in 98 countries around the world with partners and allies to find lasting solutions to poverty and injustice. It has been working in the Arab world for over thirty years.