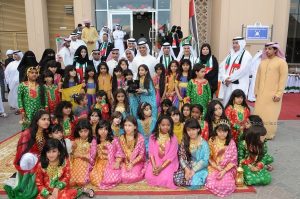 These celebrations falls in line with a range of MoF activities in celebration of the National Day, which include the signing the charter of allegiance and loyalty to H.H Sheikh Khalifa bin Zayed Al Nahyan, President of the United Arab Emirates. MoF also presented photographs of Emirati photographers affiliated with the UAE Photography Association, which feature some of the UAE’s landmarks. 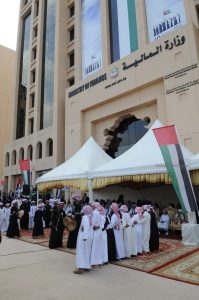 “Today we are celebrating the 40th anniversary of the UAE, where we are reflecting on the achievements and developments of our nation since it was founded by late Sheikh Zayed Bin Sultan Al Nahyan, and the late Sheikh Rashid Bin Saeed Al Maktoum, and the rulers of the UAE. We will do our best to protect the achievements we have made so far, and to continue to work hard to support this progress for years to come,” HE Al Tayer said.

The Ministry of Finance had previously held a National Day event at its headquarters in Abu Dhabi, where HE Younis Hajji Al Khouri, Undersecretary of MoF, signed the charter of allegiance and loyalty to HH Sheikh Khalifa Bin Zayed Al Nahyan, President of the UAE. The signing event was attended by a large number of employees.

MoF’s celebration included performances by participants from the Abu Dhabi Rehabilitation & Care Center for People with Special Needs, schools, and the Scouts of the UAE. A number of poets also recited poems to mark the occasion. The event was also attended by the Elderly Club in Dubai, and the Emirates Travelers Team and a number of the ministry’s partners.