The Dubai Health Authority announced key statistical results on exercise patterns of the population in the Emirate of Dubai. The results highlight the extent to which the population exercises on a regular basis to keep themselves in good health.

The findings suggest that there is a strong need to promote regular exercise to ward off lifestyle diseases like diabetes, heart attacks, overweight and strokes. Only 19% of Dubai’s population gets sufficient amount of exercise which is required to stay healthy. 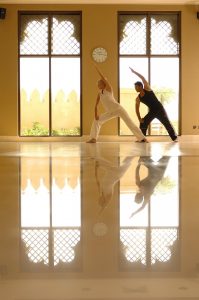 The results are part of the overall Dubai Household Health Survey (DHHS), which is a comprehensive survey of 5,000 households that was jointly conducted in 2009 by the DHA and the Dubai Statistics Centre.

As part of the survey, respondents were asked whether they undertake any moderate or intensive physical activity other than their work such as running, jogging or playing any kind of sport.

Among Emiratis aged 40 to 59 years, only 7% get enough exercise to stay healthy. This figure highlights the magnitude of the problem in terms of lack of exercises which is known to be a key factor that triggers off a host of lifestyle diseases.

The aim of the Exercise and Physical Activity module of the survey was to find out if the population of Dubai gets, ‘sufficient’ exercise to stay healthy. Therefore the parameters of the survey were developed accordingly, based on the guidelines from the U.S. Centers for Disease Control and the American College of Sports Medicine which stipulates the minimum level of exercise required to improve health and reduce the long-term risk of lifestyle diseases such as heart attack, strokes, obesity and certain chronic diseases. The survey asked respondents whether they are involved in any kind of vigorous or moderate intensity activity, other than those done as part of their work that increases their heart rate for at least 10 minutes continuously – like running or playing football or any other sport. The survey also took into consideration leisure and recreational activities as well as activities undertaken as part of one’s daily commute such as walking from one place to another. Those who responded “yes” to the above were asked “on how many days” and “for how many minutes” they engaged in such activities during a typical week.

The key findings as follows: Results for the Overall Population of Dubai

The results of the survey will be used in the emirates’ public health and awareness policies. The public, the private health sector, employees and schools should promote the need for regular exercise.