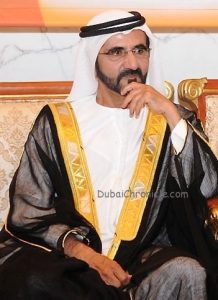 Vice President and Prime Minister of the UAE and Ruler of Dubai His Highness Sheikh Mohammed bin Rashid Al Maktoum has been named the social media personality of the year by the first digital government media forum which concluded its sessions in Dubai today in the presence of a crowd of government officials, social media experts and private sector representatives.

The selection was inspired by Sheikh Mohammed’s cordial and constant reach out to various segments of community – be Emiratis or expatriate residents – through his Facebook or Twitter and his e-interaction and networking with other peoples in many Arab and foreign countries.