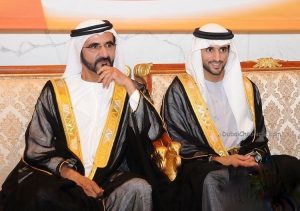 UAE Vice President, Prime Minister and Ruler of Dubai His Highness Sheikh Mohammed bin Rashid Al Maktoum met with heads of press organisations and media personalities on the sidelines of the Arab Journalism Awards ceremony at the Grand Hyatt Hotel in Dubai this evening.

The winners of the prestigious Arab Journalism Award 2011 in the 10th edition of the Arab Media Forum were selected from 3,800 submissions in eight categories from across the region.

They included Egyptian journalist Ahmad Mohammad Mahmoud of Al Ahram newspaper who died on February 3, after being shot during clashes in Cairo on January 29.

Qatari cameraman Ali Hassan Al Jaber, head of the photography department at Al Jazeera, who died on March 2 in an ambush in the Hawari region near Benghazi and Iraqi journalist Sabah Al Bazi, a reporter for Al Arabiya TV in Baghdad, who died on March 29 in the Salahuddin province of Iraq.

Shaikh Mohammed presented the 2010 Media Personality of the Year, a special recognition award, to Nasser Mohammad Al Othman, Dean of Qatari Press and Secretary-General of the Gulf Press Association for his outstanding efforts to develop the media landscape in the Gulf region and in Qatar.

The General Secretariat of the award decided this year to present four prizes in the Young Journalist segment in response to the high number of entries received and as an incentive to encourage fresh talent in the field of journalism.