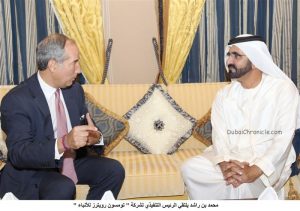 During discussions Sheikh Mohammed and his guest reviewed economic and political issues, as well as the media’s role in publicising events in the region and beyond in an efficient and factual manner without bias.

Sheikh Mohammed stressed the importance of allowing the press and media personnel the freedom and space to perform their duties. Speaking about the situation in the UAE, Sheikh Mohammed said that all media professionals, both local and foreign, enjoy the freedom of movement, action and expression. He added that the leadership fully supports the media’s role in conveying a clear and transparent picture of events in the fields of economics, culture, politics and society.

Mr Glocer thanked Sheikh Mohammed for fostering a free and transparent media environment in the UAE, saying that it has strengthened trust between the government, private institutions and the media.