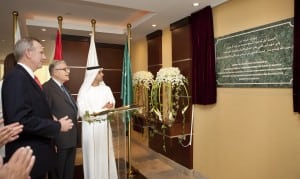 Under the patronage of H.H. General Sheikh Mohammed Bin Zayed Al Nahyan, the Crown Prince of Abu Dhabi and Deputy Supreme Commander of the UAE Armed Forces, in the presence of H.H. Sheikh Omar Bin Zayed Al Nahyan, the U.A.E. Presidentâ€™s Aide de Camp, INSEAD, the leading international business school, today inaugurated its campus in Abu Dhabi with an official ceremony and witnessed the graduation ceremony of the Masters in Entrepreneurial Leadership. The programme was exclusively developed for members of the Centre of Excellence of the, General Secretariat of the Executive Council, through a strategic partnership between INSEAD and the Centre. 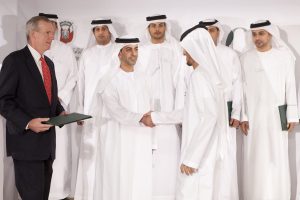 Dignitaries including the French Ambassador, Alain Azouaou, along with over 100 officials attended the event to mark INSEADâ€™s presence in the Middle East and celebrate its continued investment to develop business education in the region.

â€œThe inauguration of INSEADâ€™s campus in Abu Dhabi coincides with an important milestone in INSEADâ€™s history as we also celebrate our 50th anniversary as the business school for the world. We are grateful to the Abu Dhabi government for their continued support of our development of our third campus,â€ said J. Frank Brown, Dean of INSEAD.

Peter Jadersten, Executive Director of INSEADâ€™s Abu Dhabi Campus, added: â€œAbu Dhabi is playing a major role in the world economy, and is continuing its efforts to emerge as a regional educational and cultural hub. INSEAD is contributing to the implementation of the vision of Abu Dhabiâ€™s leadership, H.H Sheikh Khalifa Bin Zayed Al Nahyan, President of the UAE, and H.H General Sheikh Mohammed Bin Zayed Al Nahyan, the Crown Prince of Abu Dhabi and Deputy Supreme Commander of the UAE Armed Forces of developing the potential of the region. INSEAD is committed to developing business education across the Middle East, offering insights into advanced managerial ideas and worldwide business practices in one of the fastest growing and exciting geographies of the world.â€

INSEAD established its presence in the Middle East in 2007 with the opening of the Centre for Executive Education and Research. The opening of the Centre was supported by the Abu Dhabi Education Council (ADEC) to foster business education in the Middle East. Since its inception three years ago, the Centre evolved into a Campus to include resident faculty, a case development centre and several global research initiatives.

â€œINSEAD was one of the first international, higher education providers to commit to the Abu Dhabi Governmentâ€™s plans of attracting the best institutions in the world to Abu Dhabi. It is bringing students from across the region to Abu Dhabi for the highest quality educational and cultural experiences,â€ said H.E. Dr. Mugheer Khamis Al Khaili, Director General at ADEC.Â  â€œADEC congratulates INSEAD on the opening of its new campus and we look forward to continuing to work with INSEAD as partners in creating a global education hub in Abu Dhabi and an education system that will develop our emirate into an education based, knowledge -producing society,â€ he added.

In October 2010, INSEAD will launch the first Middle East section of its Global Executive MBA (GEMBA) programme. INSEADâ€™s GEMBA in Abu Dhabi offers the opportunity for those based in the region to study in the UAEâ€™s Capital.

The inauguration of INSEADâ€™s Abu Dhabi campus also marks the launch of Knowledge Arabia, a content platform in Arabic designed to showcase leading-edge business research with articles and video interviews and highlights of the latest management thinking and trends with an emphasis on practical solutions. In addition to Arabic, INSEAD Knowledge also has English and Chinese editions.

Knowledge Arabia can be accessed at the following link: www.inseadknowledge.ae

About INSEAD, The Business School for the World

As one of the worldâ€™s leading and largest graduate business schools, INSEAD brings together people, cultures and ideas from around the world to change lives and transform organisations. This worldly perspective and cultural diversity are reflected in all aspects of INSEADâ€™s research and teaching.

With three campuses in Europe (France), Asia (Singapore) and the Middle East (Abu Dhabi), INSEAD extends the reach of its business education and research across three continents. 145 renowned faculty members from 36 countries inspire more than 1,000 degree participants in the MBA, Executive MBA and PhD programmes. In addition, more than 9,500 executives participate in INSEADâ€™s executive education programmes. With the INSEAD-Wharton Alliance, MBA and co-branded executive education programmes are delivered on Wharton’s U.S. campuses in Philadelphia and San Francisco, as well as INSEADâ€™s campuses in Asia and Europe.

This academic year is an important milestone for INSEAD as it celebrates half a century of success. Fifty years ago, INSEAD pioneered the concept of international business education â€“ and is still innovating across all of the programmes, in addition to the cutting-edge research. The world and INSEAD have developed dramatically in the course of the last fifty years, but the core values on which INSEAD were founded have remained constant. These principles have enabled INSEADâ€™s entrepreneurial spirit to evolve and the school has grown into a truly global force.

Todayâ€™s organisations need leaders with the knowledge and sensitivity to operate anywhere in the world. This is why business turns to INSEAD â€“ to develop the next generation of transcultural leaders.