Under the patronage of Her Royal Highness Princess Haya Bint Al Hussein, UN Messenger of Peace, Chairperson of International Humanitarian City and wife of His Highness Sheikh Mohammed Bin Rashid Al Maktoum, Vice-President & Prime Minister of the UAE and Ruler of Dubai, the Dubai International Film Festival (DIFF), the leading cinema event in the Middle East, Africa and new Asia, will present the third annual Cinema Against AIDS Dubai gala to raise funds for amfAR, the Foundation for AIDS Research, on December 10, 2009.

The Cinema Against AIDS gala, one of amfARâ€™s international film festival circuit events, has raised a staggering AED 17.6 million (US$4.8 million) over the past two events in Dubai. This is more than one-tenth of the total of approximately US$48 million raised by Cinema Against AIDS galas globally, since 1993. The funds support amfARâ€™s activities focused on AIDS research, HIV prevention, treatment education and the advocacy of sound AIDS-related public policy.

Shivani Pandya, Managing Director, DIFF, said the overwhelming success of the Cinema Against AIDS Dubai galas highlight the power of cinema in bringing together people for worthy causes. â€œIt also puts the spotlight on Dubai, home to powerful charitable initiatives like Dubai Cares, a non-profit organization that is currently integrating the prioritization of water, sanitation and hygiene interventions in to all of its education programs around the world.â€ 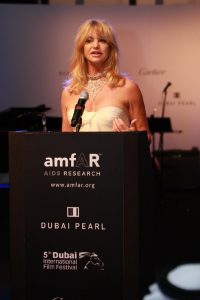 The Cinema Against AIDS Dubai event follows World AIDS Day on December 1. According to the UNAIDS 2008 report, 33 million people were living with HIV at the end of 2007, including 2 million children. Infection rates continue to increase in many countries and amfAR is at the forefront of the campaign to raise awareness of the HIV and AIDS pandemic.

â€œBy bringing together global celebrities and the Dubai community on one platform, Cinema Against AIDS Dubai highlights the magnitude of the problem and raises vital funding,â€ explained Pandya.

Abdul Majeed Ismail Al Fahim, Chairman of Pearl Dubai, principal sponsor of the event, since its first edition in 2007, said:Â  â€œThe Cinema Against AIDS Dubai gala offers us a perfect platform to reiterate our corporate social responsibility agenda and partner in a cause of global significance. Last year, all associates of Dubai Pearl joined hands for the amfAR event, and we are honoured to have made a difference through our active partnership.â€

The Cinema Against AIDS gala will feature a live auction with several unique and exclusive memorabilia from the film and fashion world. There will be a number of attractive lifestyle packages also, all aimed at promoting stronger public participation to raise funds for amfAR, which has invested nearly US$290 million in its programmes and awarded grants to more than 2,000 research teams worldwide.