Prevalence of Diabetes in the UAE at dangerous levels 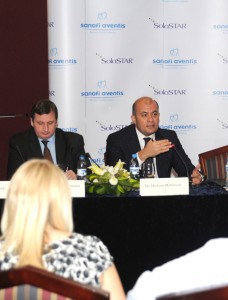 Sanofi-aventis pharmaceuticals announced today during a press conference at the Fairmount Hotel Dubai, that a new state-of-the-art disposable insulin pen, SoloSTARÂ® for Type I & II diabetics, will now be available in the UAE. In addition, Sanofi-aventis organized two symposiums for physicians, in Abu Dhabi and Dubai, on the 14th and 15th of October, discussing various methods of diabetes management.

In January 2007, the American Diabetes Association (ADA) released the new ADA Guidelines used to develop a treatment procedure to help physicians choose the most appropriate therapies for lowering blood glucose levels in people with type 2 diabetes. One of the major features endorsed by the ADA guidelines is the early addition of insulin therapy in patients who do not meet target sugar levels. 72 Specialists in the field of Endocrinology and Diabetes from the Middle East region were certified by the ADA to present this program in their home country. 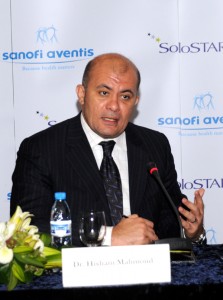 According to recent media reports, 1 out of every 4 people in the UAE is diabetic, and there is a staggering 25% prevalence rate among UAE nationals. Given the high rate of diabetes locally, and the recent release of the new ADA Guidelines, the UAE is the first country in the GCC to receive SoloSTARÂ® and will soon be followed by Kuwait.

SoloSTARÂ® is a new, easy-to-use disposable pen for use with the 24-hour insulin LANTUSÂ® or/and the rapid-acting insulin APIDRAÂ®. The pen was given EMEA approval in September 2006 and FDA approval in April 2007; it is currently available in over 21 countries around the world. In February 14th, 2008, the Chicago Athenaeum Museum of Architecture & Design awarded SoloSTARÂ® the 2007 GOOD DESIGNâ„¢ Award.

â€œType 2 diabetes is a growing epidemic in the UAE, it is our duty as specialists to explore all means to manage this disease.â€ said Dr. Hisham Mahmoud, Sanofi-aventis Medical Director, United Arab Emirates. â€œThere is a general misconception about insulin therapy among patients in the Middle East; they might assume that only advanced cases of diabetes succumb to this kind of therapy. Initiating insulin immediately if patients are not achieving target glycemia, will allow better control of the disease.â€ 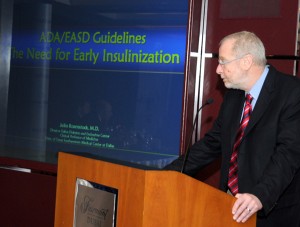 For some people with diabetes, self-injection can be a barrier to acceptance of insulin therapy. When choosing a specific insulin pen for an individual patient, clinicians consider the patient’s insulin regimen, lifestyle, and other factors that may affect the ability to use a particular device, such as manual dexterity and visual acuity. Approximately 58% of diabetics have limited joint mobility, therefore certain characteristics of a given insulin pen may make it preferable and more acceptable for patients.

â€œInsulin therapy for people with type 2 diabetes is generally initiated very late in the course of the disease, resulting in the risk of increase of diabetes-related organs damageâ€, explained Professor Julio Rosenstock, Director of the Dallas Diabetes and Endocrine Center and Clinical Professor of Medicine. â€œEasy-to-use pens such as SoloSTARÂ® bring greater flexibility for the patients and an opportunity for earlier initiation of insulin therapy which may contribute to better glycaemic controlâ€.

SoloSTARÂ® is a new, easy-to-use disposable pen for administration of LANTUSÂ® and APIDRAÂ®. SoloSTARÂ®, allows to administer doses from 1 up to 80 units, in one unit increments, in one injection. SoloSTAR offers a 25% greater maximum capacity than other insulin pens. Consequently, the administration until 80 units of insulin can be done with only one injection. SoloSTAR uses a simple, intuitive design with easy-to-read display featured and requires only a few steps to use it properly. SoloSTARÂ® is small, discreet and eliminates the need for the patient to change insulin cartridges. Easy-to-use and easy-to-inject, SoloSTARÂ® reduces the injection force by 30% or more in comparison to other most broadly available pens in its class. LantusÂ® SoloSTARÂ® and APIDRAÂ® SoloSTARÂ® were approved by the EMEA in September 2006; LANTUSÂ® SoloSTARÂ® was approved by the FDA in April 2007. LANTUSÂ® SoloSTARÂ® and APIDRAÂ® SoloSTARÂ® are launched in France, UK, Italy, Spain, Germany, Netherlands, Slovakia, Slovenia, Sweden, Norway, Austria, Denmark, Estonia, Finland, Greece, Hungary, Ireland, Latvia, Australia, Lithuania, Lebanon, and South Africa. LANTUSÂ® SoloSTARÂ® is launched in the US, Canada and Switzerland. The preparation for launches in other countries is planned during 2008.

The elegant exterior design of LantusÂ® and ApidraÂ® SoloSTARÂ® and its ease of use due to advanced technology is the result of the collaboration with DCA Design International Ltd. in Great Britain DCA Company.

Sanofi-aventis having 85 years of innovation in the diabetes is committed to offering people with diabetes an integrated system of insulin products and delivery devices. In addition to the SoloSTARÂ®, the pen portfolio available for LANTUSÂ® and APIDRAÂ® includes the OptiSetÂ® disposable pen, the OptiClikÂ® and OptiPenÂ® Pro reusable pens, and the AutopenÂ® 24 from Owen Mumford.