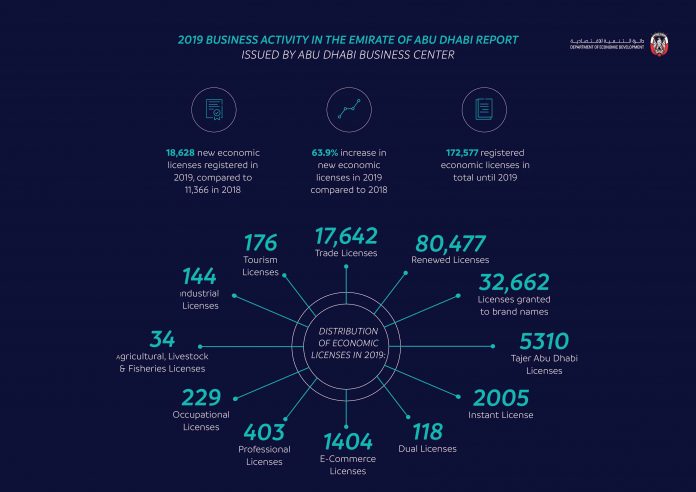 The 2019 Business Activity report issued by the Abu Dhabi Business Centre (ADBC) of the Abu Dhabi Department of Economic Development’s (ADDED) reveals that the department issued approximately 18,628 new economic licenses in 2019, reflecting a growth of 63.9 per cent as compared to the 11,366 licenses that were issued in 2018.

The ADBC report also shows that the number of renewed economic licenses in 2019 reached 80,477 licenses, demonstrating the business sector’s rapid growth pace and the confidence of investors and businessmen in Abu Dhabi’s thriving business environment.

H.E. Rashed Abdul Karim Al Balooshi, Undersecretary, ADDED, explained that the initiatives and facilities implemented by ADDED have positively contributed to the move to maintain the momentum of business activity in Abu Dhabi. In line with this, he reiterated ADBC’s commitment to introduce initiatives and programs tailored to facilitate the issuance of various economic licenses, while also helping enhance the competitiveness of the emirate’s business environment.

H.E. lauded the results achieved in 2019, which demonstrated significant growth as compared to 2018. The number of the total economic licenses registered in Abu Dhabi hit 172,577 licenses last year.

Commenting on the report’s outcomes, H.E. Hamad Abdullah Almass, Executive Director, ADBC, said: “We are so pleased to witness the positive results achieved by Abu Dhabi’s business sector, which also reflects the extensive efforts made by ADBC in line with ADDED’s vision to attract more investments to the emirate, supporting the economic diversification strategies of Abu Dhabi Government and creating an investment incubating environment through facilitating transactions and procedures for investors that can encourage them to select the emirate as the best destination where they can start and expand their business activities.”

Almass also pointed out the remarkable success achieved by ADDED’s initiatives last year, including Instant licenses that reached a total of 2,005 licenses issued by the end of 2019 and Tajer Abu Dhabi licenses with 5,310 licenses. He stated that these results serve as a great motivation for ADDED to continue its efforts to facilitate business activity in Abu Dhabi and position the emirates among the most economically strong, safe and sustainable cities in the world.

Meanwhile, ADBC has issued 118 Dual licenses for Abu Dhabi’s free zone companies in 2019, which enabled them to carry out their business activities outside these zones. A growth in the number e-commerce licenses has also been recorded with 1,404 licenses issued last year, representing a 366 per cent increase as compared to the 301 licenses issued in 2018.