Pearson, the world’s learning company, today released the results of its Global Learner Survey, a new study capturing the voice of learners worldwide. The findings point to massive global transformation in education driven by the shifting economic landscape of the new talent economy, the vast influence of technology and perceptions that education systems are out of step with learners. The study shows that learners around the world are now taking control of their education through a “do-it-yourself” (DIY) mindset, adding to their formal education with a mix of self teaching, short courses and online learning to keep pace with the talent economy. The survey also shows that learners are thinking beyond the traditional notions of learning, signaling a massive opportunity for education providers to reinvent learning to meet the needs of a new economy. 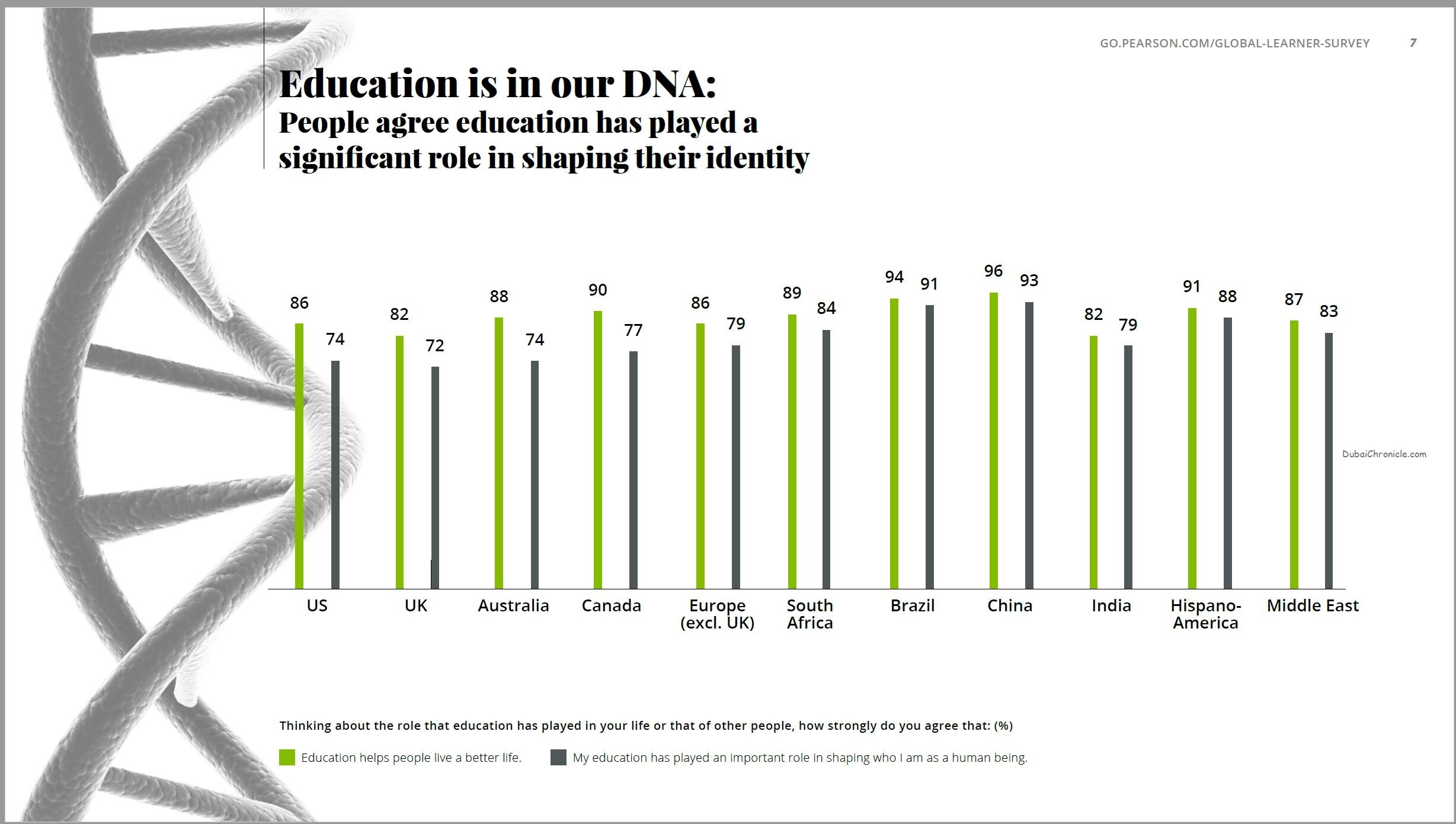 Pearson conducted the study with Harris Insights & Analytics to give learners in 19 countries the opportunity to voice their opinions on primary, secondary and higher education; careers and the future of work; and technology. More than 11,000 people, ranging in age from 16 to 70, participated in the poll. The survey is the most comprehensive and wide ranging global public opinion survey of learners to date. In addition, Pearson released today Opportunity for Higher Education in the Era of the Talent Economy, a guide to the survey’s implications and opportunities for higher education.

“Gig jobs, unconventional careers, tech disruption and lifelong learning have ushered in the talent economy. Now more than ever, learners understand the need for lifelong education,” said John Fallon, chief executive of Pearson. “People are meeting the demands of this new world of work by taking control of their own learning. Now, technology and innovation are giving educators, governments and companies the greatest opportunity in human history to rise to the occasion and improve lives through education.”

A DIY mindset is reshaping education: People are layering on to their traditional education by mixing and matching what works and what they can afford to get trained up for the new economy. Globally, 81% of people say that learning will become more self-service as people get older. Americans, Australians and South Africans agree most strongly. When they have to retrain for work, 42% of learners in the US and 50% of learners in China and India self-taught using internet resources. When asked what learning methods they prefer when upskilling, about 80% of learners in China, the US, Australia and Europe cited professional short courses or online tools. An overwhelming number of respondents from the Middle East believed that education plays a significant role in helping them lead a better life (87%) and shaping who they are as human beings (83%). Interestingly, while formal education still reigns supreme in the region, a more relaxed attitude is also emerging.

In the next decade digital and virtual learning will be the new normal. 80% of Americans believe that smart devices and apps will be used to help learners, with people in countries like China and Brazil even more enthusiastic about their use. Globally, 76% of people believe that college students will be taking online courses within 10 years and 67% believe more primary and secondary students will too. 70% of Americans believe that print textbooks will be obsolete in five years. Nearly 70% of people in the US, UK and Europe and 90% of people in China believe that AI will have a positive impact on education. In the Middle East, the survey found that digital education is now the norm – and 79% of respondents in the region believe that AI and other new technologies can enhance the learning experience and increase access to education. 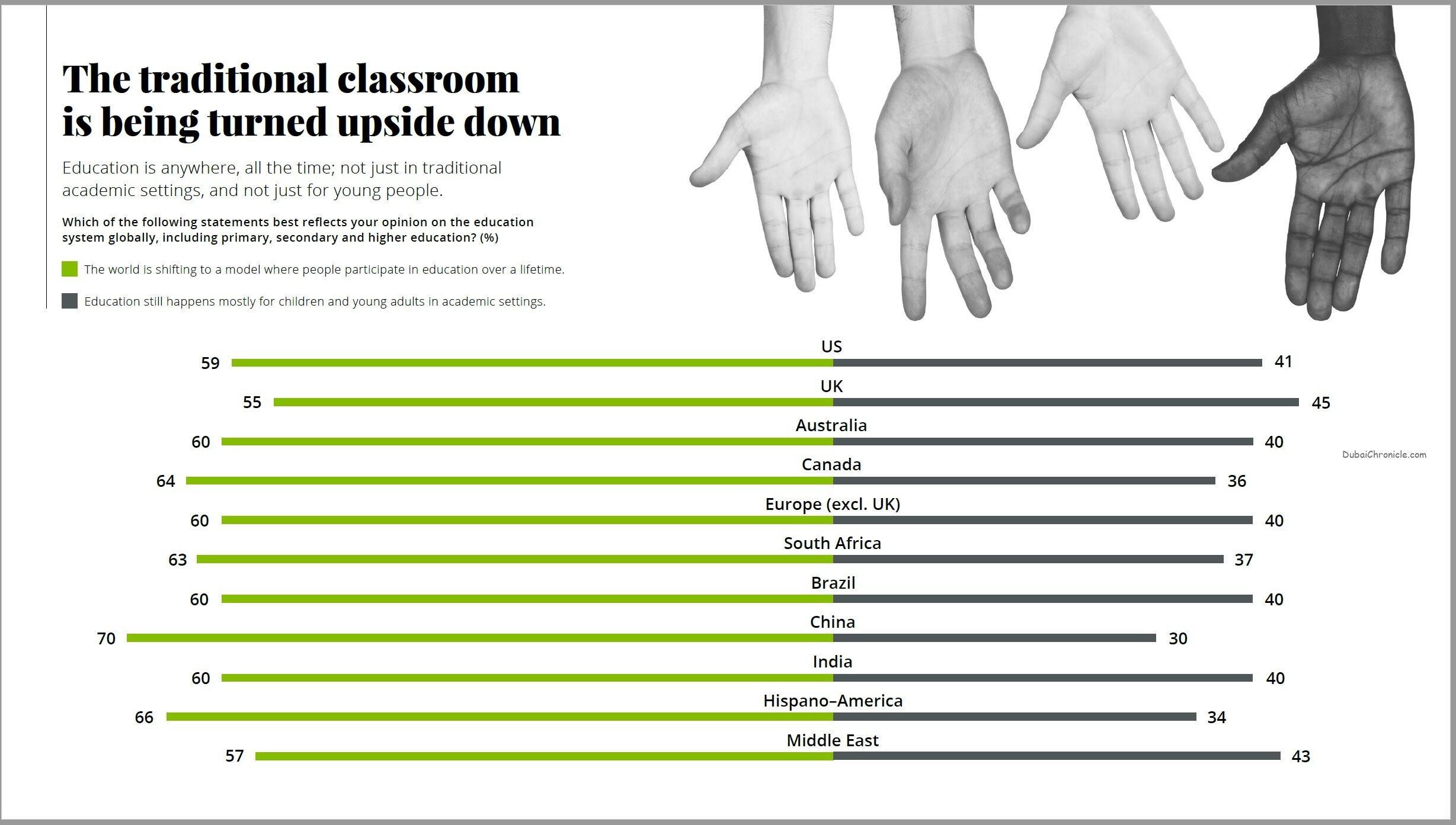 Lifelong learning is not just a philosophy, it’s the new reality. Globally, there is wide agreement that people need to keep learning throughout their career to stay up-to-date in their careers. 87% of Americans embrace lifelong learning, believing that learning doesn’t stop at school. That belief rises to 96% of people in China and 94% of people in South Africa. 73% of Americans like to reinvent themselves by learning new skills, and 52% intend to “retire” the traditional concept of retirement by pursuing a second career or part time job, starting a business or taking classes. 81% of the people in the Middle East agree that education doesn’t stop at school. People need to keep learning or re-training throughout their career to stay up-to-date, and 41% of students believe that a short training program such as a boot-camp, certificate program, or a course offered by a professional association can help them learn something new quickly for their career.

Confidence in education systems is wavering, especially in the US. 60% of Americans say education systems are failing the current generation. That perception is just as strong in Europe and even stronger in South Africa, Brazil and Hispano America. 67% of Americans believe college is getting more out of reach for the average student. Almost as many in the US don’t believe colleges and universities are teaching the right skills for today’s jobs.

Gen Z thinks you can be successful without a traditional college education. Despite statistics showing a higher lifetime earnings with a college degree, half of Gen Z learners in the US, UK and Australia think you can do “ok” in life without it. This figure was slightly lower in the Middle East, with 42% of learners saying that a college degree is essential to achieving a career success. Globally, 68% of learners think you can do just as well with an education from a vocational or trade school. A slightly higher proportion of respondents in the Middle East (71%) felt that vocational and trade schools are strong alternatives to a university degree. In fact, they believed that a degree or certificate from such schools is more likely to result in a good job with career prospects than a university degree.

China, India, Brazil and Hispano America are outpacing the US and UK in the upskilling race and defining a new global economy. More than anywhere else in the world, people in China, Brazil, India and Hispano American believe education is driving the global economy. More than two-thirds of learners in these countries have been looking to re-skill in the past two years, compared to only 31% of Americans and 24% of British learners. Workers who do upskill are enrolling in short courses, taking courses offered by their employers or professional associations, degree programs or are self-teaching. In the Middle East, 70% of the population believes that education is an important steppingstone. One needs to invest in it to achieve their work and life goals. 57% of the ME population is shifting to a model where people are lifelong learners rather than just for a part of their life.

Soft skills have an advantage over automation. While STEM skills aren’t forgotten, many also realize that uniquely human skills will give them the edge over machines and that they are very hard to learn. Globally, 78% of people say they need to do more to develop soft skills like critical thinking, problem solving and creativity, while 85% of Americans and 91% of Chinese believe universities need to increase their focus on teaching these skills in preparation for the job market. In the Middle East, 78% of respondents listed soft skills such as critical thinking, problem-solving and creativity as important.

Americans also feel strongly about safety in schools and access to education: 84% of Americans say schools are less safe than 25 years ago, the highest percentage in the world and just as many say bullying (online and in person) is making school more difficult for children. Ahead of the 2020 presidential election, 71% of Americans agree that government should provide some kind of free higher education. On the heels of the college admission scandal, 72% of Americans say universities care more about their reputation than educating students.

Learners in the UK have their own concerns: 77% of people in the UK say social media has made the school environment more difficult for students, while less than half say it actually improves learning. 46% of those in the UK would rethink their higher education decision and get vocational training or go straight to work. More than anyone else in the world, UK learners felt higher education didn’t prepare them for their chosen career.

Education is in our DNA: In UAE, people agree that education has played a significant role in shaping their identity

Vocational and trade schools: Strong alternatives to a university degree

The traditional classroom is being turned upside down

Digital Education: The new normal in the next decade