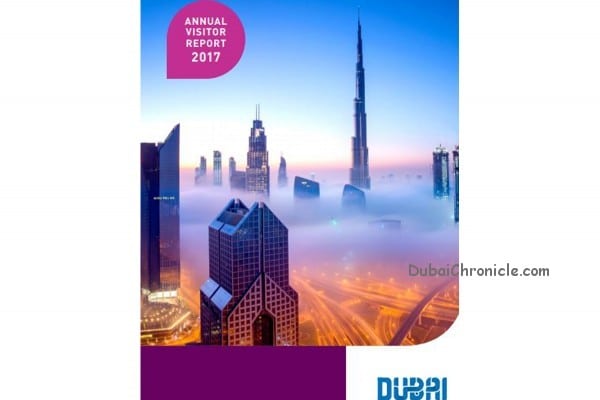 Dubai’s Department of Tourism and Commerce Marketing, last year, as well as an overview of future activities, campaigns and strategies as Dubai progresses towards its goal of welcoming 20 million visitors per year by 2020.

The report details and evaluates the growth drivers behind Dubai’s record international figure for overnight visits in 2017, which totalled 15.8 million, 6.2 percent higher than the previous year. It also analyses visitor demographics, taking a closer look at who is travelling to Dubai, from where and for what reason, as well as how they are spending their time in the city. In addition, the report reviews recent and upcoming plans, highlighting major developments across multiple sectors.

Key findings and highlights of the Annual Visitor Report 2017 include:

– Dubai’s top 10 source markets contributed a share of 59 percent of total tourist volumes, with the remainder made up of highly diversified markets across the globe.

– Three out of four visitors were families and couples, with individuals making up 14 percent, friends 8 percent, and colleagues 3 percent of total visitation.

– 73.8 percent of tourists travelled to Dubai for leisure purposes, with those visiting friends and relatives making up 13.9 percent of the total, and business travellers 11.5 percent.

– 77 percent of visitors chose to stay in paid accommodation, as opposed to staying with friends and relatives.

– The gender mix was fairly balanced, with 47 percent women travellers, while the party size averaged at 2.5 persons, staying in Dubai for an average of 7.6 days.

– The Dubai Mall remained the city’s most popular attraction, drawing 97 percent of visitors, followed by The Dubai Fountain with 81 percent, and heritage and cultural districts with 63 percent.

– Surpassing 2016 ratings, 99.4 percent of surveyed visitors said they were either ‘happy’ or ‘extremely happy’ with their overall Dubai experience, with a massive 69.1 percent in the latter category.

– Similarly, an impressive 99.3 percent of surveyed visitors indicated they would be ‘likely promoters’ or ‘active advocates’ of Dubai, recommending the destination to friends and family.

– The biggest increases in overall satisfaction levels were witnessed among travellers from Germany and France, with the biggest leaps in advocacy levels coming from German and Chinese visitors.

The report also details key successes across Dubai Tourism’s social, digital and marketing campaigns, seasonal campaigns in key markets around the world, and content partnerships with global media. Additionally, it analyses the future outlook for Dubai’s fast-evolving tourism industry, highlighting initiatives such as the emirate’s Smart City and 10X initiatives.