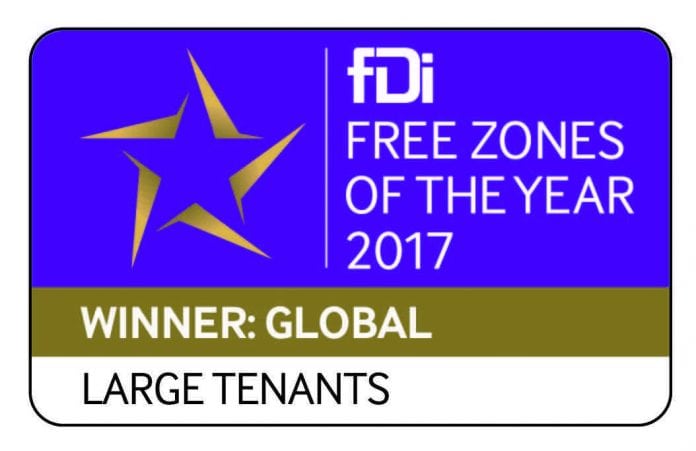 Jafza has been named the world’s best free zone for 2017 in key categories of the FDi magazine’s annual awards for global free zones.

Jafza won Free Zone of the Year 2017 for Large Tenants in Middle East and globally and was highly commended in the Global Overall and Middle East Overall categories. It was also commended for its facilities upgrades and contribution to the UAE’s national economy.

Sultan Ahmed Bin Sulayem, Chairman and CEO of DP World and Chairman of Ports, Customs and Free Zones Corporation (PCFC), said: “We are delighted that Jafza has won this award from FDi magazine. It is one of Dubai’s success stories and has developed in accordance with the vision of His Highness Sheikh Mohammed bin Rashid Al Maktoum, Vice President and Prime Minister of the UAE and Ruler of Dubai to make the emirate a hub for business and commerce. ”

Mr. Bin Sulayem said the awards confirmed the status of Jafza as a global destination for foreign companies keen on entering the Middle East and Africa markets. “Jafza is a centre for trade and logistics, which provides unrivalled benefits and incentives as well as excellent services that meet customer expectations. It attracts leading businesses and international companies through a wide range of facilities and requirements that enable them to achieve their objectives in the region,” he said.

Jafza and Jebel Ali Port contribute 21 percent of Dubai’s GDP and play a pivotal role in diversifying the emirate’s economy by attracting international companies that add value to the national economy. “We are working to facilitate business and build partnerships with a number of countries that open markets to companies operating in Jafza,” Bin Sulayem added.

Bin Sulayem added that Jafza is working with the Executive Council to implement Dubai’s plans to become a manufacturing centre. He highlighted the moves to attract more industrial companies with incentives for them to start production here. ,

Jafza is home to more than 7,000 companies, including 100 or the Global Fortune 500 companies. Most of them have established their regional headquarters in Jafza to service key markets in the Middle East, West Asia, Africa, the Commonwealth of Independent States and the Indian subcontinent.

Jafza’s total trade volume was $80.2 billion in 2016, and free zone companies employ more than 135,000 people.  According to a study by Ernst & Young, the free zone accounts for almost 32 percent of total FDI flowing into the country.