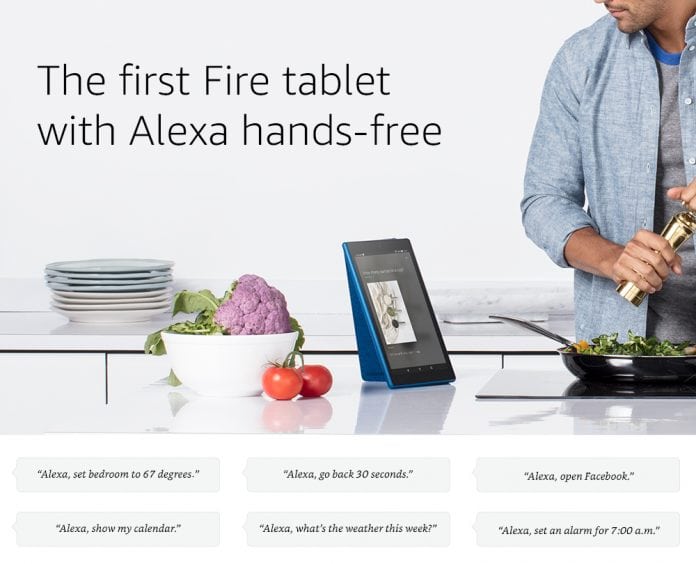 Amazon aims to dominate the voice-controlled gadget market by introducing more competitive products at high frequency. Its latest generation Fire tablet is not only faster and more capable, but also offers Alexa’s service.

Amazon’s new Fire HD 10 tablet is also a hands-free Echo. It looks and functions as tablet, but also has the capabilities of Amazon Echo.

The new Amazon Fire tablet has a 1080p 10.1-inch screen. There’s also a 1.8 GHz quad-core processor, 2 gigabytes of RAM, and 32 or 64 gigabytes of storage. That’s pretty limited, but you can expand the storage up to 256 gigabytes thanks to a microSD slot. There’s 10 hours of battery life, dual-speaker stereo Dolby Atmos audio, and, of course, that brand new hands-free Alexa feature.

The New Amazon Fire HD 10 is not the best tablet you can buy. Because you’re confined to Amazon’s Fire OS and generally steered towards buying Amazon products, the features are limited. But in general, the tablet is probably good enough for most of your needs, especially if your needs are reading or watching movies. Surely, Apple and Microsoft are offering much more sophisticated devices. But the Amazon Fire HD 10 is a killer deal, and Amazon says it’s even more durable than the iPad Pro “as measured in tumble tests.

What’s especially interesting about this Fire tablet is a new feature that lets you keep Alexa on all the time. A quick tap in the settings activates Alexa Hands Free, turning the tablet into an always-on Echo device that lets you beckon the personal assistant at any time. You’ve got full control over the tablet via voice command, and if you think creatively, it’s almost like having an even better Echo Show instead of a calm, under-featured tablet.

This is not the first time Alexa has been available on an Amazon Fire tablet, but it is the first time the feature is hands-free like the speaker-based Echo. In other words, you say “Alexa,” and the tablet works exactly like an Echo. You can turn on your connected lightbulbs. You can play movies from Amazon Prime. You can even find out about the weather. And while it seems like Alexa is suddenly everywhere, it makes perfect sense that Amazon would want to integrate its very popular personal assistant with its very popular cheap tablets.