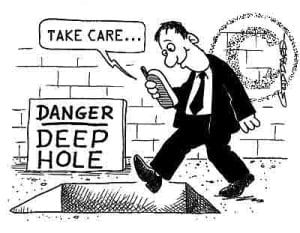 Pedestrians in Honolulu will soon have to start putting their phones away as the state has signed a ban into law that will make texting while walking illegal. Fines range from $15 to $35 for the first offense, $35 to $75 for the second and $75 to $99 for subsequent violations. The tally racks up for a period lasting a year from when the first violation occurred. The law will take effect October 25.

If such law is to be implemented in Dubai, the fines could be as much as triple having into consideration that local lifestyle is generally speaking more expensive.

You may shrug shoulders this doesn’t apply to you as you have never even been to Honolulu, but guess what?

Such observations are made official by a small study recently published in the journal PLOS One that proves how unproductive is texting while walking.

Scientists from Anglia Ruskin University in the UK recruited 21 young people to text and walk under observation. The participants promenaded along an 18-foot-long walkway that contained a fiberboard a few inches high and a step-up box (like you’d find at a gym) designed to trip them up. They navigated the walkway 12 times each: without their phone, while talking on their phone, while reading a text, and while writing and sending a text.

As you may have guessed by now, the results were not great for those who consider themselves top-notch texting multitaskers: People took more than twice as long to get from one end of the walkway to the other when they were writing a text, and 67 percent longer when they were reading one. (Talking on the phone, interestingly, was somewhere between the two, taking people 83 percent longer to cross the walkway than the control condition.) What’s more, they looked kind of funny while doing it: The distracted walkers tended to use what the study authors called a “cautious stepping strategy,” taking shorter strides and lifting their feet higher off the ground to prevent tripping. A similar study from 2015 found that texters also had a tougher time walking in a straight line.

The upside is that no one fell down. This study shows that distracted walkers are a little more careful than given credit for.  Still, all the evidence points to the idea that it’s probably best to separate texting and walking into two distinct activities. Even if you don’t distracted-walk yourself into traffic or another person, or a lamppost, or a garbage can, your journey may just be a little longer, and a little more awkward-looking, than you imagined.