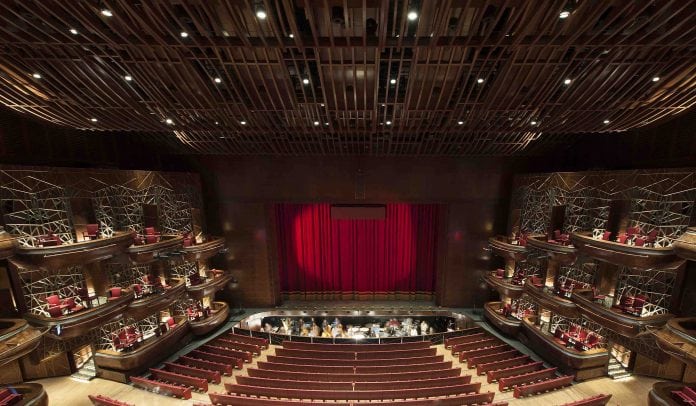 Mohamed Alabbar, Chairman of Emaar Properties, said that Emaar has invested AED 1.2 billion (about US$330 million) to develop Dubai Opera, which will bring rich cultural and economic dividends to the city. Dubai Opera will mark its grand inauguration later this year with many new fascinating attractions including a specially commissioned public realm art and several lifestyle choices.

“Dubai Opera is our tribute to the positivity and vision of His Highness Sheikh Mohammed bin Rashid Al Maktoum, UAE Vice President and Prime Minister and Ruler of Dubai, to firmly underline our city as a vibrant global cultural hub that attracts talent from around the world,” said Alabbar.

“With the opening of Dubai Opera, the city is now uniquely positioned to gain significant socio-economic benefits that once again highlight Emaar’s lasting contribution to the city’s economy,” he said.

“The iconic Dubai Opera complements the Dubai Tourism Vision announced by His Highness to welcome over 20 million annual visitors by the turn of the decade, and supports the cultural ambitions of Expo 2020 Dubai, which is expected to host over 25 million visitors. It also fulfils the central pillar of the Dubai Plan 2021 to build a city of happy, creative and empowered people by providing rich cultural experiences,” Alabbar added.

With Dubai fast becoming a global arts hub with a remarkable increase in the number of art galleries and arts events, Dubai Opera will catalyse the growth of the creative industries in the city, said Alabbar.

Alabbar says Dubai Opera is similarly creating a vibrant growth engine for the Dubai economy. A part of the US$20 billion Downtown Dubai mega-development, which is already the world’s most-visited by welcoming an annual average 80 million visitors, Dubai Opera’s impact is defined by two dividends: Cultural and Economic.

“The performances hosted by Dubai Opera generates a huge cultural dividend for Dubai by positioning it as one of the global hubs for the performing arts industry,” said Alabbar. “The dividends are direct and indirect – the first from the benefits associated with hosting world-class events, and the second as a result of the various economic activities that support the event.”

He said that Dubai Opera’s cultural dividend is also earned by providing a platform for the next generation of talent in Dubai and assuring a world-class venue for locally produced shows.

“The economic dividend of Dubai Opera is far-reaching,” said Alabbar. “Cultural events are a stimulus for tourism and in turn contributing to the aviation, hospitality and allied sectors. With its year-round calendar of high profile events by world-class performers, Dubai Opera will further attract visitors to Downtown Dubai, which has already delivered on its promise as ‘The Centre of Now.’”

Typically, the economic value of Dubai Opera will come from four channels, explained Alabbar. “The first channel is revenues from the performances and from F&B and other retail at the precinct; and the second are revenues from tourism – resulting from visitors travelling into Dubai to watch the shows.”

Aviation, hospitality and retail outside the venue comprise the third revenue stream; while the fourth is the local cultural ecosystem of local production houses and support agencies that create thousands of new jobs for creative professionals.

Legends such as Placido Domingo serve as magnets for cultural tourists with fans travelling wherever he goes. Cultural tourism is today one of the fastest-growing areas of global tourism. It is estimated that cultural or heritage activity is the sole purpose of nearly one in five European tourists, while culture forms a key feature of the trip of 80 per cent of US travelers.

Today, creative industries are seen as powerful growth drivers for economies the world over. Large-scale cultural productions account for 4.5 percent of Europe’s GDP and 8 per cent of its employment.

At the micro level, individual creative enterprises have recorded invaluable economic impact. A report by Deloitte states that the Sydney Opera House contributes US$775 million to the nation’s economy every year, and has generated 8,439 full-time jobs. The study says that it has a cultural and iconic value of US$4.6 billion, with over 1.4 million annual visitors with nearly 2,000 performances.

Many cities today regard cultural policy as economic policy. For example, the Pennsylvania Cultural Data Project, analysing the impact of the cultural sector of Philadelphia, identifies that arts, culture and creativity are an economic engine generating US$3.3 billion in jobs, household income and tax revenue.