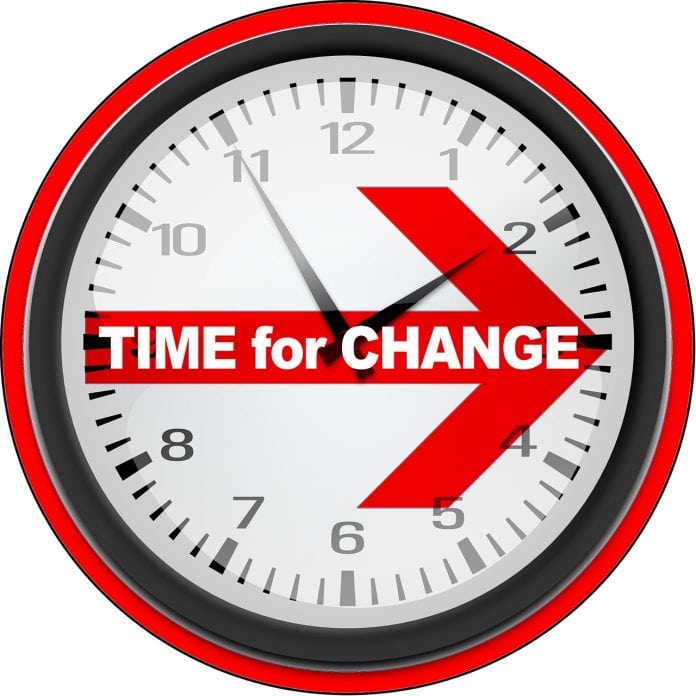 China joins the ranks of the world’s 25 most-innovative economies, while Switzerland, Sweden, the United Kingdom, the United States of America, Finland and Singapore lead the 2016 rankings in the Global Innovation Index, released today by Cornell University, INSEAD and the World Intellectual Property Organization (WIPO).

China’s top-25 entry marks the first time a middle-income country has joined the highly developed economies that have historically dominated the top of the Global Innovation Index (GII) throughout its nine years of surveying the innovative capacity of 100-plus countries across the globe.

Despite China’s rise, an “innovation divide” persists between developed and developing countries amid increasing awareness among policymakers that fostering innovation is crucial to a vibrant, competitive economy.

Innovation requires continuous investment. Before the 2009 crisis, research and development (R&D) expenditure grew at an annual pace of approximately 7%. GII 2016 data indicate that global R&D grew by only 4% in 2014. This was a result of slower growth in emerging economies and tighter R&D budgets in high-income economies – this remains a source of concern.

Among the GII 2016 leaders, four economies — Japan, the U.S., the UK, and Germany— stand out in “innovation quality,” a top-level indicator that looks at the caliber of universities, number of scientific publications and international patent filings. China moves to 17th place in innovation quality, making it the leader among middle-income economies for this indicator, followed by India which has overtaken Brazil.

The GII theme this year is “Winning with Global Innovation.” The report explores the rising share of innovation carried out via globalized innovation networks, finding that gains from global innovation can be shared more widely as cross-border flows of knowledge and talent are on the rise. The report also concludes that there is ample scope to expand global corporate and public R&D cooperation to foster future economic growth.

At the national level, the report says that innovation policies should more explicitly favor international collaboration and the diffusion of knowledge across borders. New international governance structures should also aim to increase technology diffusion to and among developing countries. 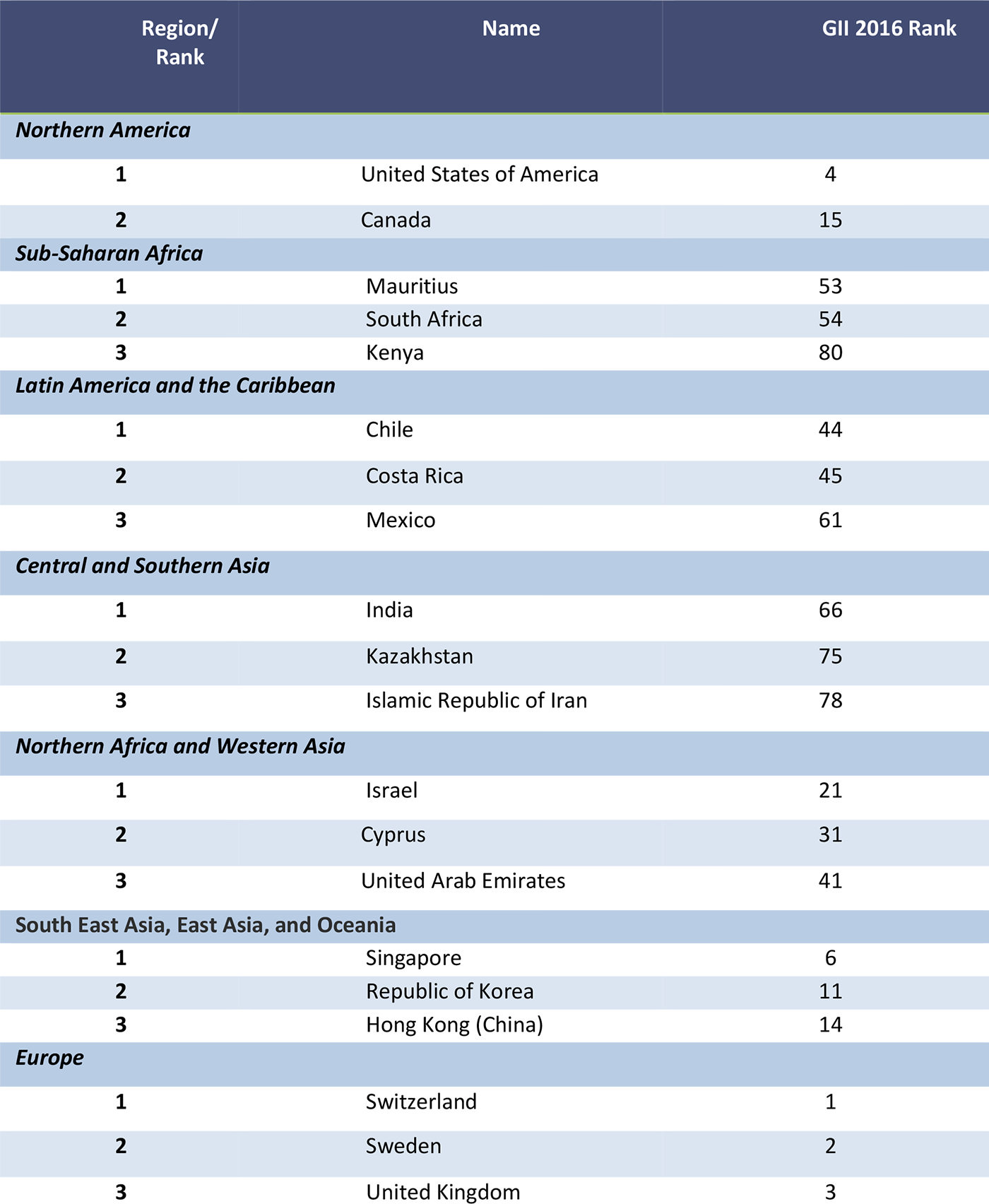 The U.S. (4th) continues to be one of the world’s most-innovative nations, with particular strengths including the presence of firms conducting global R&D, the sophistication of its financial market, including venture capital, the quality of its universities and scientific publications, software spending, and the state of its innovation clusters. The U.S. scores lower, however, in expenditures on education, in tertiary education due to its low share of graduates in science and engineering, in energy efficiency, and in economy-wide investment and productivity critical to future growth.

Canada (15th overall in the GII) has top scores in its regulatory environment, the ease of starting a business, the sophistication of its financial market, including venture capital, the quality of its universities and scientific publications, as well as in online creativity. Yet, Canada’s GII rankings had declined in previous years, with its fall from the top 10 due largely to methodological changes as well as comparatively weak performance in education and R&D expenditures, information and communication technology (ICT) services, energy efficiency, and, similarly to the U.S., in economy-wide investment and productivity figures.

Since 2012, Sub-Saharan Africa has counted more countries than any other region among the group of “innovation achievers” – countries that perform better than their level of development would predict. This year, Kenya, Madagascar, Malawi, Mozambique, Rwanda, and Uganda stand out. Better rankings on the indicators for institutions, business sophistication, and knowledge and technology output have allowed the region to catch up to Central and Southern Asia, and to overtake Northern Africa and Western Asia.

Average regional performance shows strengths in the ease of starting a business, ICTs, business-model creation, and relative expenditure on education, with weaknesses in firms conducting global R&D, high-tech exports, the quality of local universities and number of scientific publications. In general, further efforts are required in Human capital, Research and Infrastructure.

As economic growth in Sub-Saharan Africa is slowing, the GII 2016 shows that Sub-Saharan Africa must preserve its current innovation momentum, while continuing to diversify economies away from oil production and commodity revenues.

Latin America and the Caribbean

Chile takes the top spot among all economies in the region (44th) driven by good scores on the indicators for institutions, infrastructure and business sophistication, followed by Costa Rica (45th), Mexico (61st),

Uruguay (62nd), and Colombia (63rd). Brazil is ranked 69th, with strengths in relevant education and R&D factors, the quality of its scientific publications, and high-tech manufacturing; yet relative weaknesses in its business environment (123rd), elements of tertiary education (111th) and, more generally, its ability to generate innovation outputs, and the creation of new businesses.

Latin America is a region with important untapped innovation potential. The GII rankings of local economies have not significantly improved relative to other regions in recent years, and no country in the region currently shows a performance higher than its GDP.

The report suggests that, as Latin America, and especially Brazil, have entered into a zone of economic turbulence, it is important to overcome short-term political and economic constraints and to redouble longer-term innovation commitments. Greater regional R&D and innovation cooperation can help the region in this process, as underlined in this year’s GII theme.

India, 66th, is the top-ranked economy in Central and Southern Asia, showing particular strengths in tertiary education and R&D, including global R&D intensive firms, the quality of its universities and scientific publications, its market sophistication and ICT service exports where it ranks first in the world. India also over-performs in innovation relative to its GDP. It ranks second on innovation quality amongst middle-income economies, overtaking Brazil. Relative weaknesses exist in the indicators for business environment, education expenditures, new business creations and the creative goods and services production.

“The commitment of India to innovation and improved innovation metrics is strong and growing, helping to improve the innovation environment. This trend will help gradually lift India closer to other top-ranked innovation economies”, says Chandrajit Banerjee, Director General of Confederation of Indian Industry (CII). Following India in the region are Kazakhstan (75th), the Islamic Republic of Iran (78th), Tajikistan (86th), Sri Lanka (91st), and Bhutan (96th).

Of the top five GII performers in this region, two are from the six-member Gulf Cooperation Council (GCC): United Arab Emirates (41st) and the Kingdom of Saudi Arabia (49th). Many of the GCC countries are diversifying their economies following a decades-long dependence on oil, turning their focus towards more innovation-driven and diverse sources of growth and overcoming relative shortcomings in areas, such as Institutions, market and business sophistication.

“Innovation no longer occurs in silos, today it crosses borders and relies on collaboration between various entities to create a win-win prospect. The UAE is harnessing a globalized strategy to lead innovation internationally through its Smart City agenda and bring about a greater degree of convenience and satisfaction, and ultimately happiness, for all,” says Osman Sultan, Chief Executive Officer, du.

The region shows its highest average scores in ICT access and ICT-driven business model creation, as well as in e-government, and productivity growth. Less notable performances are seen in high-tech exports, patents, and the quality of publications.

Singapore (6th), the Republic of Korea (11th), Hong Kong (China) (14th), Japan (16th), and New Zealand (17th) lead the rankings in this region. The majority of innovation leaders in the GII are in this region or Europe.

The region’s strongest average performance is in the number of teachers per pupils and productivity growth, with lower scores in R&D financed by foreign firms, ICT services exports and imports, and intellectual property receipts.

Fifteen of the top 25 economies in the GII come from Europe, including the top three. Switzerland retains the top position for the sixth consecutive year, followed by Sweden (2nd), and the United Kingdom (3rd). Following these top 3 regional leaders are Finland (5th), Ireland (7th), Denmark (8th), the Netherlands (9th), and Germany (10th), which joins the top 10 in 2016.

Europe benefits from comparatively strong institutions and well-developed infrastructure, while room for improvement is found in business sophistication and knowledge and technology outputs. Europe does particularly well in environmental performance, ICT access, and school life expectancy. At the same time, there is room for improvement in R&D financed by businesses, R&D financed by foreign firms, high-tech exports, and international patent filings.

About the Global Innovation Index

The Global Innovation Index 2016 (GII), in its 9th edition this year, is co-published by Cornell University, INSEAD, and the World Intellectual Property Organization (WIPO, a specialized agency of the United Nations).

Published annually since 2007, the GII is now a leading benchmarking tool for business executives, policy makers and others seeking insight into the state of innovation around the world. Policymakers, business leaders and other stakeholders use the GII to evaluate progress on a continual basis. This year’s study benefits from the experience of its Knowledge Partners, A.T. Kearney and IMP³rove – European Innovation Management Academy, the Confederation of Indian Industry and du, as well as of an Advisory Board of international experts.

The core of the GII Report consists of a ranking of world economies’ innovation capabilities and results. Recognizing the key role of innovation as a driver of economic growth and prosperity, and the need for a broad horizontal vision of innovation applicable to developed and emerging economies, the GII includes indicators that go beyond the traditional measures of innovation such as the level of research and development.

To support the global innovation debate, to guide polices and to highlight good practices, metrics are required to assess innovation and related policy performance. The GII creates an environment in which innovation factors are under continual evaluation, including the following features:

• 128 country profiles, including data, ranks and strengths and weaknesses on 82 indicators

• 82 data tables for indicators from over 30 international public and private sources, of which 58 are hard data, 19 composite indicators, and 5 survey questions

• A transparent and replicable computation methodology including 90% confidence interval for each index ranking (GII, output and input sub-indices) and an analysis of factors affecting year-on-year changes in rankings

The index is submitted to an independent statistical audit by the Joint Research Centre of the European Commission.