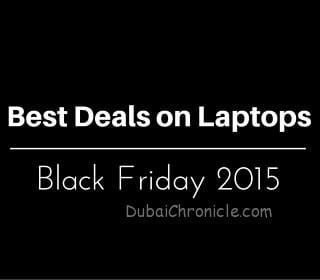 Best deals on laptops are most sought by consumers during holiday sales, either for personal use or for Christmas gifts. In order to highlight the best deals on laptops to our readers, we follow a few trustworthy retailers from Black Friday to Cyber Monday.

This year’s Black Friday sale is the first one since Microsoft unveiled its latest operating system, Windows 10. A lot of retailers are expected to clear out their existing notebook stocks; which can only mean one thing – best deals on laptops which run on Windows 8.1. No worries, the upgrade to Windows 10 is still free of charge. So to start with, here are the best deals on Windows laptops online:

On this page we’re listing all of the best deals on laptops this Black Friday – whether you’re after a cheap Chromebook as a second living room internet browser, an Ultrabook as your main computer or a Macbook to show off in cafes!

Check out all of the best laptop deals so far, as chosen by Dubai Chronicle’s editors:

If we have missed out on a particularly attractive deal, if you have found a better one, if there is a misprice, if items are out of stocks or if deals have expired, feel free to leave a note in the comments section and we’ll include it in our deal with a “thank you” note to the contributor.