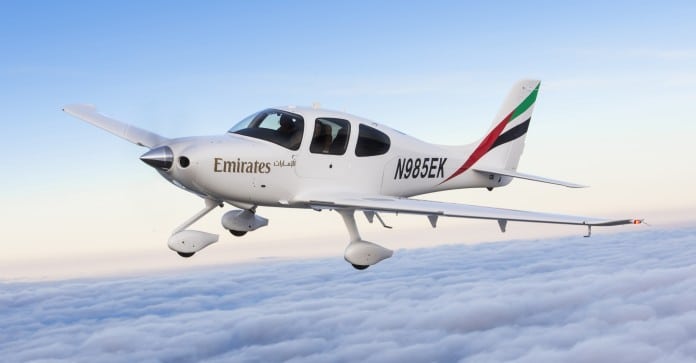 Emirates Flight Training Academy, developed by Emirates airline to address its growing need for pilots, has signed an agreement with Cirrus Aircraft and Embraer to order 27 new aircraft. The order includes 22 single-piston engine Cirrus SR22’s and 5 twin-jet Embraer Phenom 100E, which are valued at more than $39 million dollars at list prices.

The aircraft, which will be delivered starting in 2017, will be used by cadet pilots as they train to become fully-qualified commercial pilots for Emirates. This order will allow Emirates Flight Training Academy cadet pilots to receive, for the first time, 100% of their training in Dubai. Previously, cadet pilots underwent a majority of their training at a variety of locations overseas. In addition to consolidating education into one location in the Middle East, the new aircraft order also ensures cadets will have access to the youngest training fleet in the world.

Adel Al Redha, Emirates Executive Vice President and Chief Operations Officer, said: “Industry forecasts show growth in the need of pilots particularly over the next few years. The Middle East and the Gulf region will have the highest demand for pilots to support its expansion and introduction of new aircraft. The Emirates Flight Training Academy is our investment and response to this pressing need. The academy will offer training programmes using the latest available technology and advanced aircraft. Our decision to purchase these new aircraft for training underscores our commitment to equip the Academy, as well as the aviation industry with the infrastructure needed to produce a highly-skilled pilot workforce. While the biggest beneficiary of this programme is Emirates, it’s our plan to offer the programme to external candidates around the world.”

The Emirates Flight Training Academy will initially focus on Emirates’ existing cadet pilot programme for UAE nationals, with the aim to expand intake to other candidates in the future.

Once accepted into the cadet programme, students will be provided on campus accommodation and will undergo rigorous ground training. After completing this component of their education, they will begin their in-flight training on the Cirrus SR22 aircraft to learn basic commercial piloting skills. Cadets will then advance to the Embraer Phenom 100E aircraft to obtain their twin engine jet rating and their Commercial Pilot License on a multi-engine aircraft with Instrument Rating, and frozen Airline Transport Pilot’s License (ATPL).

In traditional cadet programmes, students move from single-engine piston aircraft to twin-engine piston aircraft before transitioning to jet airplanes. With the Emirates Flight Training Academy, students move from the single-engine piston Cirrus SR22 directly to the jet-powered Embraer Phenom 100E. This eliminates an extra step in becoming a commercial pilot and gives cadet pilots an enhanced curriculum during single engine training, as well as more experience flying jet aircraft before being trained as an official Emirates pilot. Overall, the programme including ground school, flying and simulator training lasts three and a half years.