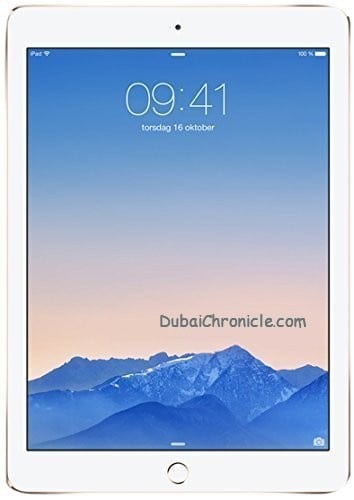 Although some consumers feared that Apple’s second-generation iPad Air might only be an improved version of its predecessor, the tech giant proved them wrong and releasing one of the most impressive tablet devices on today’s market. Moreover, the company claims that iPad Air 2, which is available for purchase here, is the most powerful, as well as the slimmest iPad it has ever created. However, if you are still not sure whether you should invest in this device or not, you should take a careful look at its qualities.

Apple again chose to stick to its favourite material – anodized aluminum. That gives the iPad Air 2 a premium look. The device is offered in silver, gold and grey and, as it was already mentioned, its profile is almost unbelievably thin (just 6.1 mm). In addition to that, it weights only 437g. All of that make it one very portable and nice-looking gadget. In fact, in many ways, its design is more appealing than that of the new-generation iPad mini.

iPad Air 2 supports a resolution of of 2048 x 1536 and it has a pixel density of 264 ppi. Also, the tablet comes with a 9.7” screen which has a special coating that reduces glare. The display also features a scratch-resistant glass that, however, is not fingerprint-resistant.

For reasons unknown, Apple has decided to keep the A7 processor on the latest iPad mini. Despite that, it upgraded iPad Air 2 with an A8x chip. As a result, consumers get a device that is twelve times more powerful compared to the first iPad Air. The performance and graphics offered by this innovative gadget are not far behind. Still, Air 2 supports RAM of just 1GB that, in a way, makes all its power meaningless. The second-generation iPad Air is available in three versions according their memory capacity – 16GB, 64GB and 128GB.

iPad Air 2 rocks an 8MP camera which has become a standard for many high-end or even mid-range tablets. It also features a secondary camera, but it supports barely 1.2MP. So, don’t expect to get impressive selfies out of it. On the other hand, compared to the cameras of its predecessor, Air 2 is definitely an improvement.

Apple’s new iPad Air relies on iOS 8.1. The updated mobile operating system of the company may not shine with a long list of updates and improvements, but it does add a few new things to the package. Some of them include Interactive Notifications, better Autocorrect feature and a Continuity feature that allows users to start doing a task on the iPad and then continue it on their MacBook Air.

How It Compared to the Competition?

Nexus 9 – iPad Air 2 has its advantages over the HTC Nexus 9. Even though it is bigger in size, it is a thinner compared to the first Lollipop tablet. Also, Nexus 9’s material look, feel and are of a low-end quality. Still, the new Nexus is more affordable, it has two times more RAM than Air 2. Apart from that, the two devices seem quite similar – they both have the same pixel quality, they do not support memory cards and they both rely on 8MP rear cameras. It should be noted, however, that Nexus 9’s screen is smaller, which makes its pixel quality higher. In addition, it rocks a better front-facing camera.

Samsung Galaxy Tab S 10.5 – Galaxy Tab S has a larger screen, which naturally makes it slightly heavier and thicker than the iPad Air 2. On the other hand, the devices have almost identical primary cameras and video capabilities. But let’s not forget that Samsung’s tablet is made from plastic. As for the gadget’s other specifications – they are good, but simply not as good as those of the second-generation iPad Air.

Surface Pro 3 – When it comes to entertainment, media and gaming, photos, and web browsing, iPad takes the lead. Also, the iPad Air 2 is much cheaper compared to Microsoft’s Surface Pro 3. Nevertheless, Pro 3 is a hybrid device, which is so powerful that it can be used a fully functional computer. With Apple’s latest iPad, we do not have that luxury.

iPad Air 2 is the most advanced iPad that has the power to lure even Android fans to the iOS world. It is not simply an update of the first iPad Air, but a major upgrade. It may fall behind in a few categories when compared to its key rivals, but it never loses the game.